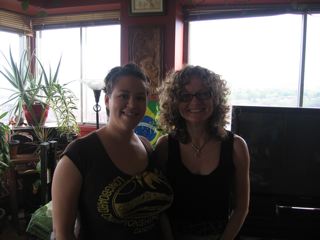 A month or two ago, Amy Lord, a former student of mine at Marianopolis College, got in touch to tell me she'd started a writers' collective. Amy (that's her in today's pic)  told me a little about her group -- four or five aspiring writers who plan to meet regularly to share their work and support each other as they embark on the writing life -- and asked whether I'd be willing to pop by for a visit.

Which is what I did yesterday afternoon. In about two hours, I tried to tell the four members who were there, everything I know and have figured out about writing! I told them not to be discouraged on the days when they think their writing isn't very good -- that that is all part of the process.

Amy reminds me a lot of where I was when I was her age. I knew I wanted to write, but I wasn't sure I had what it takes to make it as a writer. And in my case, I was a little afraid to find out!

So, during my visit yesterday, I tried to tell Amy's writing collective the sorts of things I wish someone had told me when I was starting out. Here are a few more in case you're in a similar spot: Write about places you know. Write about people you know, too -- but protect their privacy by changing things up! Write about emotions you have experienced. Write about what hurts.

One of the members of Amy's collective is her brother Andrew, who works as a copywriter at a big ad agency here in Montreal. I was moved when Andrew described how powerful he finds his sister's writing. Though I've never been part of a writers' group or collective, I'd say that that mutual support and respect is vital. As I told the group yesterday, writers need tough skins to deal with rejections and re-writes and some of the less pleasant business of writing, but writers also need to be kind to each other -- and to themselves.

So here's to everyone out there who's finding their way and finding their stories. I'm one of those people, too. It's not an easy life, but on a good day, even the hard parts seem worth the trouble!!