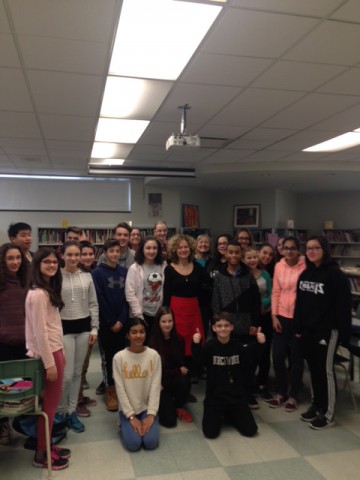 Today's pic was taken on my third day of writing workshops at St. Thomas High School. Mostly, I've been at the school to work with grade nine classes, but today, I had the added pleasure of working with two grade seven groups. It was Matthieu, a grade seven student in one of Miss Beach's classes who came up with a story idea that inspired the title for today's blog post: "What if a whole class was on the run from the law?" Hey, Matthieu, I'm pretty busy with writing at the moment, so I think YOU SHOULD GET STARTED IMMEDIATELY ON THAT BOOK! Also, does your name really have two t's in it -- or did I get it wrong? (If so, let me know and I'll fix it.)

As usual, I have many things to report about my visit. One of the highlights was meeting a young man, Noah, who is another of Miss Beach's grade seven students. Like me, Noah loves doing research (I told the students that research tends to be an essential part of the fiction-writing process). At recess, I also learned that Noah also loves drawing and that, in fourth grade, a friend challenged him to write a book. "I completed two chapters and then I ran out of ideas," Noah told me. So I gave him my advice: to keep writing, even when it feels like the ideas are not coming. Sometimes, I even write on the page things like, "I am stuck. I hate this. This part is so frustrating. Why do I even want to be a writer?" And you know what? If I stick with it, I almost always get UN-STUCK!

Mr. Katz's class got a good laugh when I read aloud something a student named Abdullah had written: "This exercise did not work for me!" But they stopped laughing when I read the next sentence: "There were too many things jumping around in my mind." Excellent news, Abdullah, because it sounds to me like you are a person with a lot of stories to write and tell.

In Ms. Ditchburn's class, three girls sitting together (Alicia, Cameron and Samantha) all like to ask my favourite question: "What if?" I told them that if they cannot turn off the "What if?"" switch in their brains, and if they hate their very first drafts, they might be real writers!

I was also impressed with Palmer, one of Ms. Ditchburn's ninth graders, who described his classmates in this way: "Everyone seems to be looking around and smiling. They are all holding in a laugh... well, most of them." What I like about Palmer's writing is that it captures a moment, and that it also gives us a sense of Palmer's observant and humorous nature.

Lunch time was pretty special too -- that's because I told students to come and hang out with me in the library if they felt like it. I showed a few of them the manuscript I am working on (I'm at the stage where I am responding to my editor's comments) and the students helped me get the wording right in a few spots. (Thanks, guys!) Sarah and Amanda, both excellent writers, showed me some of their work. Sarah is working on a fascinating project about "untold stories throughout history" and Amanda is writing about a boy who does not want to hang out with a cousin, only to discover that he really likes her. Amanda has a flare for dialogue. At one point in her story, the narrator's thoughts are interrupted by a question: "Lemonade?" (I just loved that.)

A student named Alex was part of our lunch bunch too. He told us he was named after Alexander the Great. Cool! Also, he told us about his great-grandfather, a Polish Jew who survived Auschwitz because he worked as a tailor for the Nazis. Alex, you must write that story!

I'll be back at St. Thomas on Monday -- and available at junior lunch. Thanks to librarian Mrs. Pye, for inviting me, and to Miss Beach, Mr. Katz, and Ms. Ditchburn for sharing your classes with me. As for the students, KEEP WRITING. (And reading.) See you next week!

Tweet
"What if the lunch monitor and the school secretar...
Super vendredi, oops Friday... at Ecole Secondaire...