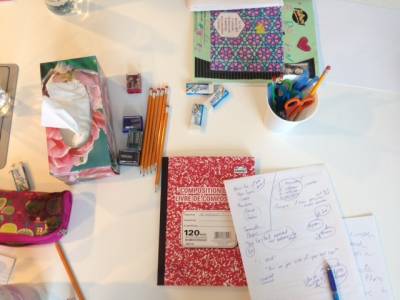 Today was the first of the workshops -- and I think it was a moving experience for all of us. I spent the first half hour sharing writing tips, but then we quickly moved on to writing exercises. (And by the way, I did most of the workshop in French because that's the first language of nearly all the women who attended.) Rather than telling you about the tips, I'm going to tell you about what some of the women said -- and wrote.

Many of the women already have an interest in writing. One of the participants -- I'll cal her V -- said, "J'écris pour mieux comprendre" -- which I thought was just gorgeous. If you need help with the translation, it's: "I write to understand better." Another participant, Eve (not her real name) really worked hard during the writing exercises. Afterwards, she observed, "I haven't expressed my emotions in writing for a long time." Interestingly, Eve explained that it's easy for her to tak about her emotions, but that putting those emotions on paper has always been more difficult.

Many authors (including me in my YA novel So Much It Hurts) have written about abuse. The challenge, I think, is to TAKE readers THERE. V did that beautifully when she told us how, after she left her abusive partner, she felt sad for her dog who missed him. That detail touched me and I know I won't forget it. V, you took us there with your story.

A little over a week ago, I was walking along the beach in Tofino, British Columbia, thinking how as a writer I need to focus on the stories that matter most to me. Today was a reminder of exactly that -- what matters most. For me, it's courage and resilience. I'm the one giving the writing workshop, but I'm aready getting a lot from it. A grand merci to the participants and to the organi2ers for bringing me there...

Heroes in My Backyard: Virtual Visit to Laurentian...
Fun Morning With Students from Central Middle Scho...