A New Kind of Classroom 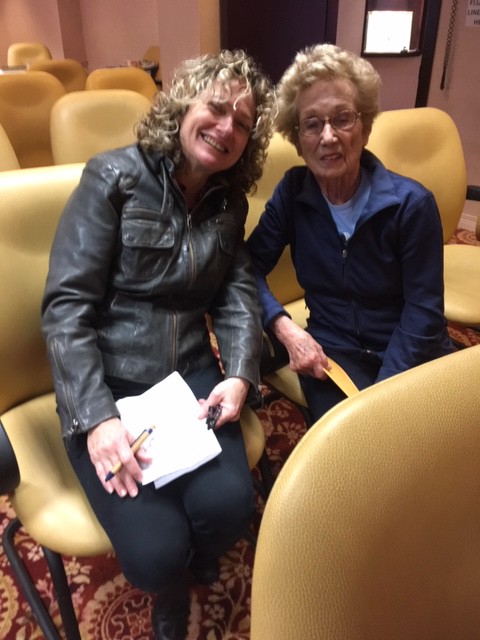 Teachers aren't supposed to have favourites -- but let's be honest, it sometimes happens!

I'm just home from Place Kensington, a seniors' residence in Westmount. I was there on a mission for the Blue Metropolis Literary Foundation. Actress Fanny Lacroix and I will be working with 60 seniors this winter, helping them to prepare for a Blue Metropolis Festival event called Literarily Hilarious.

Fanny couldn't join me this morning at Place Kensington, so I had the class all to myself!

We talked about storytelling and humour -- and I made them laugh with the story about how I pretended to be a princess when I went to summer camp back in 1971! (That experience led me to write the kids' book Princess Angelica, Camp Catastrophe). We also talked about how some funny stories have a tragic edge.

Anyway, I had more than a dozen participants and they were focused and funny and smart.

I didn't take notes until I was leaving -- that's when I started chatting with Sheila Zittrer, who's spry and smart and fit at the age of 92. (That's Sheila with me in today's pic.) Sheila told me a wonderful story and she said I must pass it on to young people, so I told her I'd tell it to my students, and also to you, my blog readers. Here goes -- and a word of warning, the story isn't funny, it's dead-serious and it's about writing --

"The greatest upset of my life," Sheila told me, "was something that happened when I was nine or ten. I was an imaginative child. I wrote secretly in my bedroom. I had written 100 pages. It was a nonsense little story. I came out of my room one day and I was so proud. I said, 'Mom, you know what? I wrote a book!' And she laughed at me. I cried bitterly and I tore up everything. I never wrote again. I lost all confidence. The important lesson that I want young people to know is to keep trying. Don't let people discourage you!"

Sheila added that her mom was young and inexperienced -- so she would have had no idea of the impact of her laughter on her daughter's life...

Quite the story, no?

And you know what? Sheila may be 92 -- but she's about to start writing again! Thanks to Blue Metropolis's new project! It may be rainy and grey in Montreal today, but thanks to Sheila and the other seniors I met this morning, it's all blue skies and sunshine in my head. Special thanks to Place Kensington's Doreen Friedman for rounding up such a cool crowd!