Did I Mention that I Saw a Black Bear?

Guess what? I saw a black bear today! We were on the road between Stewart Crossing and Mayo!

I knew starting this blog entry with a bear would catch your attention. Now let me tell you about the rest of my day!

Michel Emery, learning resource consultant with Yukon Education, picked me up at 6:30 AM and we headed north to Carmacks. We made a pit stop at Lac Laberge, the setting of Robert Service’s poem, “The Cremation of Sam McGee,” and a second pit stop at Braeburn Lodge, which is famous for its cinnamon buns and curmudgeonly owner (who turned out not only to be uncurmudgeonly, but also a former Montreal resident).

Then it was on to Tantalus School, where I worked with Miss Lanie and Miss Berry’s grades five, six and seven students. I was also reunited with school principal, Morgan Douglas Alexander, who is an old friend of mine from Kuujjuaq.

One of my favourite moments at Tantalus School happened during the writing exercise I did with the students. Here’s a pic I took when they were hard at work. 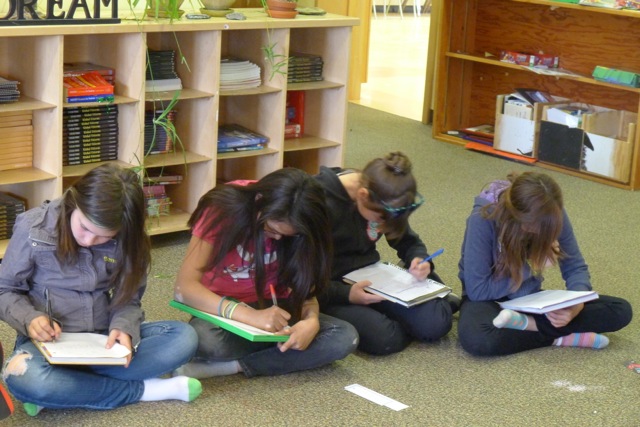 Abi was writing about a memory of being five years old. She wrote about a time when she and her sister were slurping their soup, and “Grandma was trying to be angry.” I loved that bit about “trying to be angry” since it lets us know that Grandma loved the girls too much to be really angry with them. Abi agreed to let me read the line out loud, which was when I learned that Abi’s grandmother was in the classroom with us! She’s Amy, who teaches Northern Tutchone language at the school.

After Tantalus, we drove another 90 minutes north to Pelley, where I worked with Mr. Ward’s grades six and seven students at Eliza Van Bibber Elementary School. I think I’ve told you that every class I’ve worked with has been unique – well, Mr. Ward’s students have a tank of salmon. Check out the students and their salmon (they raised them from eggs) in the next pic. 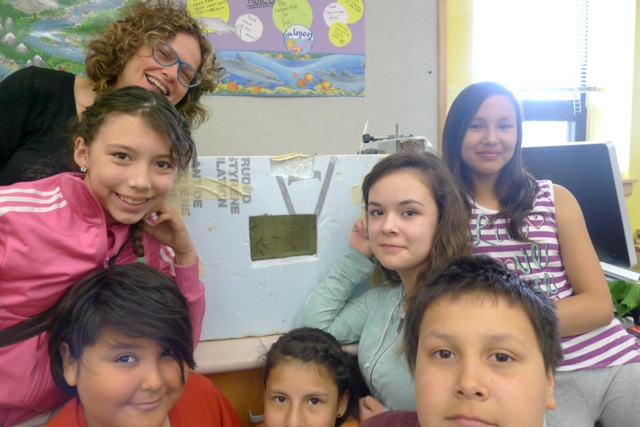 During the writing exercise, Jessica T wrote about, “trees lots of trees.” I told her that I loved that line too … and that I thought it would make a great book title.

Tomorrow, I will visit my 14th school in the Yukon this week. I should probably be tuckered out, but I’m not. If you know me, you’ll know I’m an energetic woman… being in the Yukon and working with its young people is giving me even more energy. Look out Montreal – I’ll be home on Monday!

Mayo: A Little Town With Lots of Stories
Wednesday in Whitehorse