Mayo: A Little Town With Lots of Stories 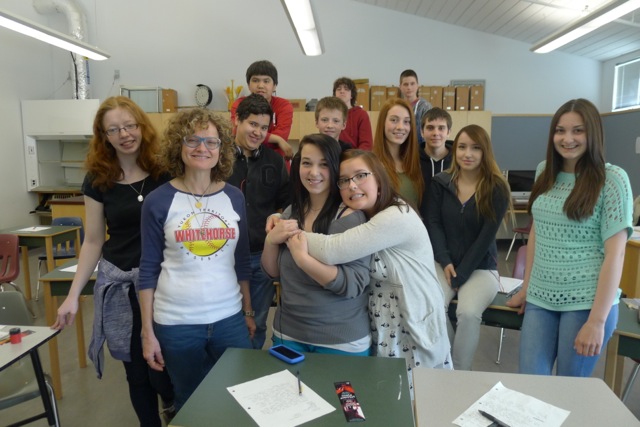 Can you believe I visited 14 schools in the Yukon in five days? Today I woke up in Mayo, a little town four hours north of Whitehorse, so that I could work with grades seven to twelve students at J.V. Clark School.

It turns out that though Mayo is a little town, it's full of stories! For instance, when we arrived yesterday, we learned that the mayor is also the school bus driver, and that he also works at the liquor store! We'd also heard a rumour that the pizza was really good in a town called Keno, but that was another 30 km. down the road. We got to talking with the mayor about pizza, which is how we learned that the guy who has the pizza stand in Keno is named Mike Mancini and that he substitutes at J.V. Clark. Because Mike's house was nearby (everything is nearby in Mayo), we left a note on his door saying we'd heard about his pizza and was there any way he could make us one? It turned out there was a way. Forty-five minutes later, we were eating the most delicious all-dressed pizza I've ever had!

What, you may ask, does any of this have to do with TD Canadian Children's Book Week? Well, it's certainly an example of a story with a happy ending! Mike Mancini's name also came up during my presentation to the students. I was telling them that writers need to be readers. And I used Mike as an example. "I'll bet you," I told the students, "that when Mike's not in Mayo or Keno, he tries other people's pizza! It's the same thing for writers! We get ideas and inspiration from other people's stories!"

A student named Humiel -- he's recently arrived in Mayo from Spain -- filled a page during the writing exercise I gave the group. Here's what Humiel had to say about the experience: "I just took something in my head and put it down on paper." Hey, I was thinking that is not a bad way to end this week's blog entries about TD Canadian Children's Book Week. This is where all writing starts -- taking something in our heads and putting it down on paper (or on a computer screen). Here's to all the wonderful students and teachers I've met this week in the Yukon.

Special special thanks to Helen O'Connor, for helping get things organized, and to Michel Emery of Yukon Education. I could not have had a better guide -- or a better person to share an all-dressed pizza with!

To close tonight's blog entry, I thought you'd like to see this pic. It's me with Mike Mancini -- and our all-dressed pizza! 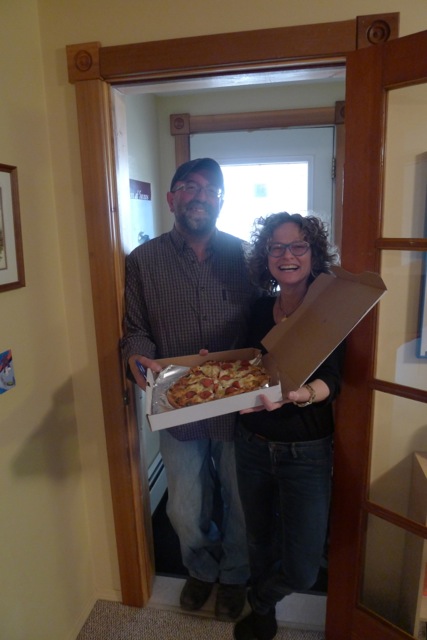 Tweet
It's All About Courage -- Lessons from a Special C...
Did I Mention that I Saw a Black Bear?

great picture of the class.

Hi Victoria, How's your writing going? Glad you like the pic of the class! What about the pic of Mike, the pizza man?!

0 Cancel Reply
Hi Victoria, How's your writing going? Glad you like the pic of the class! What about the pic of Mike, the pizza man?!
Cancel Update Comment