Fun Start to the Week at East Hill Elementary School 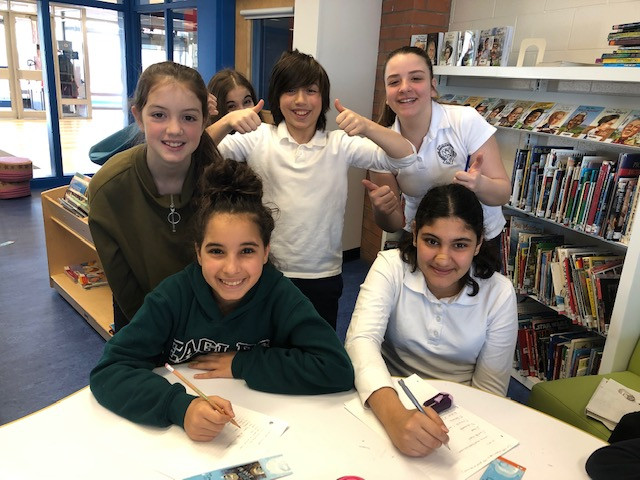 I kicked off the week with a fun visit this morning to East Hill Elementary School in Rivières-des-Prairies. Over the next couple of weeks, I'll be doing two more visits to East Hill, as well as three visits to another school in the area. Rivières-des-Prairies is about a fifty-minute drive from where I live in Montreal and it's a part of the Montreal Island I had never visited. The houses in the area look nice -- and I can tell you for sure that the kids are super!

In today's pic, that's Diamante and Ariane at the front, demonstrating perfect student body language. Note the perfectly poised pencils -- and of course, the smiling faces! I like to use body language as an example when I talk about how authors search for interesting details. Also, if you know me, you'll know I have an OBSESSION with body language!

I worked first with Madame Johanne's Grade Six class, and then with Miss Luciana's Grade Fives. Because I had nearly two hours with each group, there was plenty of time for writing exercises. I asked the Grade Sixes to write a short blurb describing the book they would most want to read. Diamante wrote about "a girl named Max Einstein, who's obsessed with Albert Einstein." It's a good thing that Diamante is an Einstein fan herself -- that will give her a head-start when she starts writing her book. I LOVE LOVE the idea, Diamante! (Also, I might steal your name for an upcoming book. I'd never heard it before -- and I like it a lot!) A student named Dante (another great name) wrote about "Martin [who] just wanted to cook." I learned later that Dante is hooked on cooking shows. Dante, that's another super book idea. GET TO WORK, GUYS!

When I asked the students what the "first cousin" of writing is, a student named Noah got the correct answer: Reading. As Noah explained to the class, "If you wanna write, you need to read." Exactly, Noah! He also told me, "I like to read -- sometimes."

We also discussed how trouble helps "fuel" a story -- in other words, without trouble, a story cannot move forward. So I told the class, "If you've ever felt lonely, or overwhelmed, or sad or betrayed... congratulations!" Then I asked them, "Why I did just say 'Congratulations!'?" A student named Luca knew the answer. He said, "it's because now you've got a story." Right on, Luca!

I worked with the Grade Fives after recess. In the imagine-the-book-you-want-to-read exercise, Liana came up with an intriguing premise: "a world where the girls did the work and the guys did the cleaning." I bet a lot of people would read that book, Liana! Sara had another great book idea: "the story of a princess who's a thief." I asked Sara what kind of stuff her imaginary princess steals, but Sara didn't know the answer yet. See how writing takes thinking!

Both groups had a lot of questions for me. Daniel wanted to know, "Do you have to spend your whole day writing the book?" I told him the answer is yes -- and no. The thing is, I explained, I "write" my books even when I am doing something else, such as driving to school, or taking a walk, or even making tea. On the other hand, if I can get in two or three hours of actual writing-writing at my desk, that's what I consider an excellent writing day.

Jessica told me she loves to write: "I write books with my friends, but I always get distracted." I suggested that distraction may not be such a bad thing -- as long as she remembers to jot down her ideas when they come to her. I told the students that I have an "ideas" file on my computer, and every now and then, I go back to it and see which idea is clamouring the loudest, asking to be turned into a story.

I'll be back at East Hill on Wednesday this week. Thanks to the teachers for sharing your students, thanks to librarian Miss Ida for the invite (and the cough drops, and the tea, and the blueberries -- shhhh! don't tell, there's a strict no-eating and no-drinking rule in the library), and thanks especially to the kids for getting my week off to such a lively, happy start!