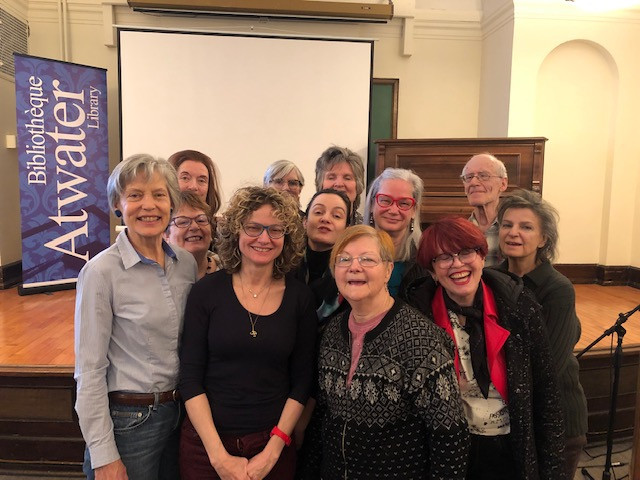 Actor Fanny La Croix (she's the kid behind me in today's pic!) were at Atwater Library this morning working with a group of terrific seniors on a Blue Metropolis Literary Foundation project called Simply Hilarious. I'm in charge of helping participants craft funny stories; Fanny's helping our storytellers work on their delivery. This was our second of two sessions at the library -- we've already worked with other seniors at a residence called Place Kensington, as well as at Cote St. Luc's Eleanor London Libary.

Our top storytellers will be participating in an exciting event at this year's Blue Metropolis Literary Festival. And here's a tip: Simply Hilarious is going to be an event you don't want to miss!

Today, Fanny and I heard and worked on stories about two sisters who ran nude across their front lawn on Montreal's West Island; a blind date that nearly went wrong; how a bottle of Scotch helped a woman deal with a terrible injury; and also how a woman in her 80s fell for a guy who got in touch with her after nearly sixty years. I must say we all laughed a lot -- and got a little choked up too.

One participant, Carolynn, told us that, "I grew up in a sad house" and that it was difficult for her to remember happy moments from her childhood. I told Carolynn, who later told me that she is writing her memoirs, that I think Growing Up In a Sad House would make a great book title. What do you think?

Robert, who's not in today's pic since he's the one who took it, told me he learned from our workshops that, "We all have stories to tell."

Fanny told a participant named Katherine that she had a "great body" and that she reminded Fanny of Katharine Hepburn. By "great body," Fanny explained, she didn't only mean that Katherine was in excellent shape, but that she incorporated physicality in her storytelling. On the way out today, Katherine told me that, "I'm channeling my inner Katharine Hepburn!"

Fanny will be back at the library to help participants do a "dress rehearsal" for the Blue Met show. Check this space for more details about the event. Thanks to Blue Met for making this program possible, and thanks to all the workshop participants for sharing your stories. On my walk home today, I thought how my head was full of stories. And so was my heart! See you at the Blue Metropolis Literary Festival!

Fun Start to the Week at East Hill Elementary Scho...
Worth the Drive to Longueuil