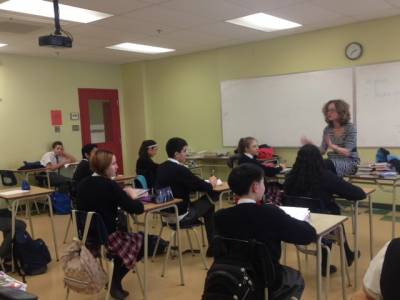 I'm just back from my second of three visits this month to Kuper Academy in Kirkland. This afternoon, I worked with three Grade Eight classes -- and there were many interesting and fun moments.

I'll begin with an interesting moment: a student named Mathew told me his grandfather, who is German and whom Mathew calls "Opa" (the same name I used to call my Dutch grandfather) helped Jews in hiding during the Holocaust by bringing them food. Luckily for Mathew, his opa is still alive... so I told Mathew he needs to hang out with him and learn his stories! As I pointed out, sometimes older people are more comfortable sharing their pasts with their grandchildren than with their own kids. So get to work, Mathew!

I got Ms. Machaca's class to write about the book each of them most wants to read. Interestingly, three students wrote about soccer. Alexander imagined a story that combined soccer and aliens; Efren was interested in a story about a kidnapped soccer player; and Amrit had a story idea about a poor Brazilian kid who becomes a soccer star.

Another fun moment happened when I was advising the students that in order to get a secret, they might try giving a secret -- in other words, tell one of their own. A student named Brandon asked, "Does it work if you make it up?" My immediate answer was no -- because I think that if we want to have honest, deep conversation with someone, we need to be honest ourselves. But then I gave Brandon's question a little more thought and I decided to give him credit for even coming up with it -- since his question is really about using imagination. In a way, Brandon, all fiction writers are liars -- and now the concept gets even more complicated -- what we aim to do in our fiction is get at essential human truths!

I'll be back to do one last class at Kuper on Monday, Feb. 23. If any of the students I've met want to show me your writing, I could meet you in the library at lunch and we could talk stories. Let Miss Mohammed know if that sounds like a plan.

Visit to Riverdale, A School Close to My Heart...
Happy Day at Kuper Academy