Visit to Riverdale, A School Close to My Heart... 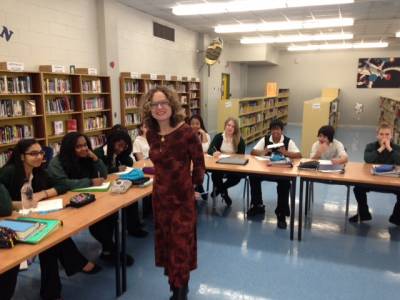 I'm just home from Riverdale High School -- a school that's close to my heart. That's because my last book, Hate Mail, was written with the help of a wonderful group of students at Riverdale and their teacher Karen Scott. The book grew out of an amazing Blue Metropolis Literary Foundation project called Libres comme l'art.

Today, I did writing workshops with two of Miss Blake's English classes and I must say they were both lively crews. But I also had a few visitors from Miss Scott's group. It was great to see you guys!

In today's pic, I am working with the class I saw this morning. One of the students in the pic is named Briyaunah -- when I was teaching the writing rule (I don't usually like to teach rules, but this is my one exception) SHOW; DON'T TELL, I explained how there's a semi-colon... which was when Briyaunah drew a semi-colon in the air and smiled at me. If you are a regular reader of this blog, you'll know that I am crazy about body language -- well, Briyaunah's drawing that semi-colon was very cool body language and it showed me that a) she was paying attention and b) she knows what a semi-colon is!

When we talked about revising, a student named Zac said, "I only hand in first drafts." When I asked Zac how that is working out for him, he admitted, "I might be failing English." Luckily, before I finished my session, I got Zac to solemnly promise that he will now revise and re-do his work before handing it in. Let me know if that helps pick up your English average, Zac!

THe group I worked with this afternoon was even LIVELIER -- by that I mean it was a bit of a challenge to get them to focus. But hey, they did -- and they turned out to be wonderful, too. Also, they had a ton of questions for me, which made my day more fun and interesting. My favourite question came from a guy named Jack who, when I told them that I write every single day, asked, "Doesn't writing get boring?" I responded by asking Jack a question: "Does thinking ever get boring?" and he said, "No, I like to think"... so I explained that for me, writing IS thinking.

Anyway, it's nearly time for me to head to Marianopolis to teach my own Writing for Children class. But first I need to say a special thanks to Mrs. Strano, the librarian at Riverdale, for the invite, and for making me the best lunch EVER. Thanks to Miss Blake's classes for your energy, and to Miss Scott's former students for coming to say hi.

Tweet
Visit to Lauren Hill Academy, Another School that'...
Highlights of Today's Visit to Kuper Academy

I passed english i dont know how but i did -zac

Hey Elior and Zac, Thanks for your comments. I was really impressed by both of you today. And hey, Zac, glad you passed English. Think how amazing you'll do once you start re-writing your assignments!

0 Cancel Reply
Hey Elior and Zac, Thanks for your comments. I was really impressed by both of you today. And hey, Zac, glad you passed English. Think how amazing you'll do once you start re-writing your assignments! ;)
Cancel Update Comment