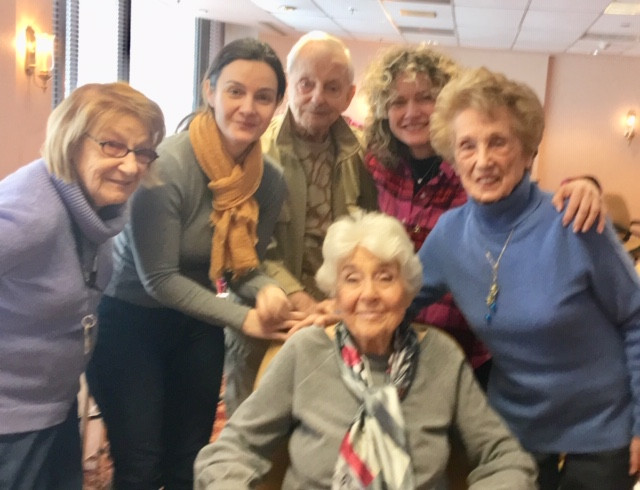 Actor Fanny La Croix (that's Fanny wearing the peach-coloured scarf in today's pic) and I spent the morning at Place Kensington, a Montreal seniors' residence. We were working with a group of lively, totally with-it seniors who will be taking part in this year's Blue Metropolis Literary Festival. I'm not supposed to tell you too much about the Blue Met event -- but I can tell you it involves seniors and storytelling and it's going to be hilarious. I'm helping seniors find their stories and put them into words; Fanny is in charge of making their on-stage performances stellar.

Luckily for us, the seniors we've met so far are natural storytellers. (We'll be heading next to the Cote St. Luc Library, and lin March to the Atwater Library to continue our work.)

The gentleman in today's pic is named Sam. He's working on a wonderful story about his porcelain collection. The woman wearing the grey top is Sarah, and she's got an unforgettable story about a famous historic funeral which she attended as a child. When we were wrapping up today, Sarah told us, "As I've aged, I feel I have to define myself. Before you came, I was writing down different episodes, hoping to tell my children and grandchildren, and you have reinforced this process."

The woman wearing glasses is Eve -- Eve has some homework to do on her story! And the woman in blue closest to me is Sheila, who is 92 years old and in remarkably fine shape. I like Sheila's story so much I've been telling it to all my friends! I don't want to give away too much -- except to say it involves a cheeky budgie. Sheila's family lives in Toronto. I told Sheila she had better make sure they are here for the Blue Metropolis Festival in May. And you know what Sheila answered? "I'd better be here!"

Fanny did vocal exercises with the seniors (there were several more who attended, but who were not around when we found someone to snap today's pic), as well as an exercise called "dropping in" which encouraged participants to return to a memory and really feel it.

Sheila not only cracked me up with her story and her witty comment, she also made my day when she talked about the impact our work has had on her: "You triggered something in me. I'm going to write more stories."

So keep your eyes and ears open for more details about the upcoming Blue Metropolis Literary Festival. Our storytelling evening is going to be one event you won't want to miss. And something tells me you'll need to get your ticket early. This one's gonna be sold out!