In Which I Invent a New Writing Exercise -- that Works! 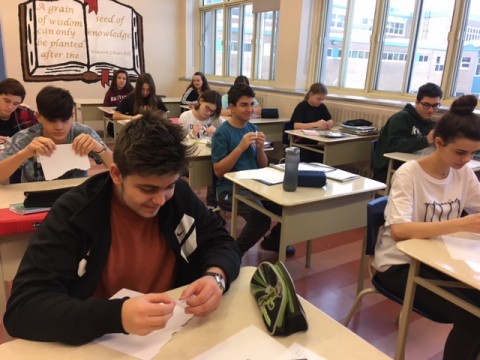 What in the world, you may be asking yourself, are the students doing in today's pic? Making origami? Nope, though they are folding pieces of paper.

So, I was back today at St. Thomas High School for the third of four days of writing workshops. I took today's pic during first period, when I was working with Mr. Rowland's Grade Nine class. I had just told them something I once heard David Small, the author and illustrator of the brilliant graphic novel Stiches, say: ""Write about what keeps you up at night." That's when I came up with my brand new exercise. And it worked! I asked the students to fold up the bottom of their sheets of paper, and write one sentence about what keeps them up at night -- a worry, a fear, a bad memory. After they were done, I told them to tear off the strip of paper, then fold it up into a tiny piece ... and wait, there's still more to my exercise! I told them to hide those folded-up slivers somewhere special -- in their pencil cases, in their night tables ... and to keep them always. Then, I told them, when they are ready (there's no telling when that might be) they should turn whatever is written on those slivers into stories.

Next I worked with one of Mr. Katz's Grade Nine classes. I did a variation on the same exercise (this time I asked the student to write a sentence describing the hardest thing they have ever gone through). A student named Jonathan commented afterwards, "I really want to throw it out." I liked that strong emotion, Jonathan, and don't you throw out the piece of paper! By the way, even if you do, that experience is part of you. You might as well think of it as material to use in a story!

We did a longer exercise afterwards that involved a memory from when the students were ten years old. Melissa gave me permission to quote her moving, powerful opening line: "My mom is crying." See how the language is simple and direct... and how you want to keep reading to find out what's going on? Beautiful work, Melissa! Olivier made a list of thoughts. I asked his permission to quote the first and last ones. He started with the thought "Dad loss" -- Olivier explained that he was remembering what happened when his parents split up (a difficult memory, but another one that makes for important stories). And Olivier ended his list with the thought, "Hormones begin." I told Oliver that we need honest stories about what it's like to be a boy growing up -- and having to deal with hormones! Olivier, WRITE IT!

I ended the morning with a double-group: Ms. Yates's Grade Nines (if you read yesterday's blog entry, you may remember that they drove me a little crazy) together with another one of Mr. Katz's Grade Nines. And guess what? THE COMBINATION WORKED. And guess what else? I had asked the "challenging" group yesterday to see if they could interview their grandparents and find out the hardest things they had ever been through. To my delight, several of the students actually did it. So, while the students were working on a writing exercise, I read the stories about their grandparents -- and they were super. Sophia wrote about her grandfather growing up poor in Italy: "there wasn't much money for food or clothing." It turns out that Sophia is going to Italy this summer -- and that her grandfather might be coming. AMAZING!! Bring your notebook, Sophia. Get your granddad to tell you more. It'll be easier for him to remember his past when he is in Italy. Jessica wrote about how her grandfather "almost died in a shooting line" in Lebanon. And Ben wrote about how his grandfather, who worked for VIA in the 1980s, was at Central Station during an explosion: "He saw a woman whose jacket melted onto her." Those are all powerful stories -- keep working on them.

I must say that one of the highlights of my day was staying to have lunch in the library, where I was joined by five students who wanted to show me their writing and get some feedback. You guys were amazing. While I was working with the students, I have to admit I forgot that they were only in high school. I was especially pleased that Jonathan (the same Jonathan I mentioned before) decided to develop what he had done during a writing exercise yesterday into a real story. YAY!! Sean, a serious student whom I met last year, dropped by too. I learned from his writing that Sean has a warm sense of humour. My favourite line in his piece? "Being a hero is hard work." Nice!!

I'll be back at St. Thomas on Monday for my last day of workshops. And I'll be around for both lunch periods. So if you go to St. Thomas, and you're an aspiring writer, get to work this weekend and bring me something to read on Monday!

Many thanks to the kids today, to their teachers, and especially to my friend librarian Mrs. Pye for the invite -- and for making me (and all the kids at St. Thomas) feel so welcome at your library!

College-Style Class for Grades 3 & 4 Students at K...
In Which I Meet Clever Kids -- and a Senator

Monique, when I read your posts, I want to turn back the clock. Instead, I think of all the students who can say, I remember Monique; she came to our school. I

0 Cancel Reply
Monique, when I read your posts, I want to turn back the clock. Instead, I think of all the students who can say, I remember Monique; she came to our school. I
Cancel Update Comment
First Page Previous Page 1 Next Page Last Page