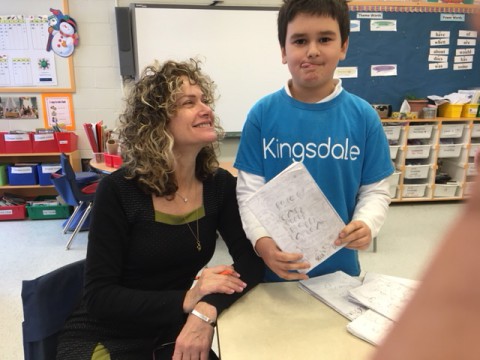 Sometimes, people who don't know much about writing for kids will say something to me such as, "I guess you have to dumb your stories down." Oh, does that every annoy me! What those people don't get is that kids are super smart (sometimes I think they're quite a lot smarter than adults, especially ones who make that sort of remark!!). Here's one thing I know for sure: if a writer dumbed a book down, a kid would hate the book.

Same goes for teaching. Though I have been teaching college for more than 30 years (I know, I know, you'd never have guessed it!! haha!!), and most of the writing workshops I do are at high schools, I was really looking forward to my day today -- I've been asked to do two days of writing workshops for Grades Three and Four students at Kingsdale Academy in Kirkland. And I certainly didn't "dumb down" my lessons. In fact, I treated the eight and nine-year-olds the same way (or pretty close to the same way) I treat my college students. And I think it's safe to say my strategy worked.

See how I'm grinning in today's pic? That's because a student named Geoffrey was showing me his books. Geoffrey began writing books at the age of eight. He's now nine and as you can see, it's been a big year for him! Also, Geoffrey made a clever remark when I was talking about how first drafts are always rough, and need a ton of rewriting. "It's like an artist making a sketch," Geoffrey said. Pretty deep for a nine-year-old, wouldn't you say?

I showed the students my journal and explained that for nearly 30 years, I've been writing three pages a day in a book like the one I had with me. I told them that they need to write regularly too, that writing has to become a habit. I suggested they might try writing just TWO words a day -- one word to describe how their yesterday was, another word to describe how they hope their today will be. They came up with some great answers. Lucas ( a student in the afternoon group) said his yesterday was "tiring" and he hopes his today will be "peaceful." Nice, accurate vocabulary, Lucas!

I used my memory exercise with both the morning and afternoon groups -- I had them remember back to when they were five years old. Daniel remembered when his parents were making pizza: " I can feel my tummy rumbling.... there are green things on the pizza." Don't you love the word rumbling and the fact that there were "green things" on Daniel's pizza? I also loved Sartaj's story. He remembered "my friend's mean sister." I think that would make a great book title, Sartaj: My Friend's Mean Sister. I would definitely buy that book. Sartaj also remembered something that made me laugh (it's always good to make your reader laugh): "finding out bad words in Indian." Write that story up too, Sartaj!

I asked the afternoon group how many of them love to read. Imagine my delight when every single one of Mrs. Arcamone's students raised their hands! Wow! I have to say a word here about Mrs. Arcamone. She is a special teacher, who has a calming effect on her classes. In fact, after lunch, she gave them quiet meditative time, accompanied by music -- and you know what? It was good for me too!

I'll be back to work with Mrs. Arcamone's kids next Friday. In the mean time, I gave them a few choices of things they can work on before they see me again. My plan for next week is to roll up my sleeves and give the students some feedback on their writing.

Oh, I nearly forgot to tell you the most fun part (for me). I test-read my soon-to-be-released chapter book, Princess Angelica: Camp Catastrophe to both groups. They're exactly the right age for the book. And I'm pretty sure they liked it. I think that because several asked to borrow my copy. YAY! DID I SAY YAY? Also, Mrs. Arcamone told me a great story. She used to teach kindergarten and when she did, she told her students SHE WAS A PRINCESS (like the girl in my book!!). She told me that she used to tell her kindergarten kids, "I"m just pretending to be a teacher!"

So, here's to writers and storytellers of all ages. Here's to writing about difficult subjects, being courageous, and finding solace in turning our lived experiences into stories that can make readers laugh and cry. Thanks to librarain Mrs. Di Maulo for the invite, and to Mrs. Arcamone for sharing your delightful kids (and your story) with me. And to the kids, what can I say? You know how I'm smiling in today's pic? That's exactly what happens to my face when I think about our time together today!!!

Sweet Last Day at St. Thomas High School
In Which I Invent a New Writing Exercise -- that W...

I loved reading your blog about coming to my class.
Emma

0 Cancel Reply
I loved reading your blog about coming to my class. Emma
Cancel Update Comment

The students and I loved having you in our class! You are so dynamic and you were able to engage all the students. We are looking forward to your visit next Friday! Thank you for enriching our day!

0 Cancel Reply
The students and I loved having you in our class! You are so dynamic and you were able to engage all the students. We are looking forward to your visit next Friday! Thank you for enriching our day!
Cancel Update Comment
First Page Previous Page 1 Next Page Last Page