Loads of Stories at Joliette High 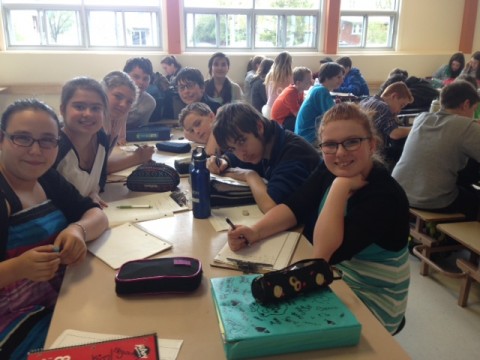 I must say it was an EXCITING day today at Jollette High School.

I was there to do writing workshops with Miss Harrison and Mr. Balassone's Grade Seven English classes. There were 53 students in all. Originally, we were going to divide them into two groups, but when I heard I could have the students for TWICE AS LONG, well I suggested we combine the two groups. Now, in case you haven't figured this out for yourselves, 53 grade sevens is a lot of kids. But I must say that overall they were wonderful, and many did really beautiful work.

We talked about how TROUBLE is the gasoline that moves a story forward. So, of course, I was super interested when I learned that one student was carrying around what he told me is called a "tracer" -- he explained that it's like a behavior report. You know what? He should write a book called Tracer! I would definitely read it!

More trouble struck at lunch time when a student may have broken his wrist. In the morning, I worked with students in the CLC (community learning centre) room, but in the afternoon, we moved to the cafeteria. Well, imagine this: a student named Emilio and I  watched through the cafeteria windows as another student (I'll call him W) got into the school secretary's car so she could take him to the hospital ... and his arm was in a sling. Of course, I'm sorry for the young man's pain, but there was another story unfolding right before our eyes. "You should write it!" Emilio told me. I thought that since he goes to the school and will be there tomorrow to find out what happened, HE should be the one to write the story!

I also talked about the importance of uncovering secrets -- and of how sometimes, it's easiest to get older people to tell us their secrets. That's because seniors are sometimes lonely and they want to tell their stories! A student named William told me about his grandfather who came from Croatia and how, when he was young, he worked building roads. And a student named Alex told me about his interesting relatives who came from Greece. As I told Alex, "Get cracking on your stories!"

I also want to say a word about my lunch hour today at Joliette High. Usually, I just hang out at the library over lunch when I am doing a school visit, but today, I had some great company -- a bunch of students, as well as Mrs. Murphy, who runs the CLC and who coordinated my visit today. Looking back at lunch time, I realize I had some of the best conversations with kids that I've had in a long time.Here are some examples:

A student named Julia told me about her obsession with Dr. Who (she was even wearing a Dr. Who scarf). When I asked Julia what was so great about Dr. Who, she told me, "The characters" -- which prompted me to tell her it's the same with novels -- great characters make a book great!

Then there was Lucas, whom Mrs. Murphy described as the school's "in-house songwriter." It turns out that Lucas is a remarkable and very talented young man. He has written songs about bullying and suicide. I asked his permission to quote a little of his lyrics -- here goes: "Get shoved to the ground/ Pushed around / That's my life." I love that Lucas has found a way to turn difficult life experience into something beautiful. Check out his Facebook page at www.facebook.com/lucasthebullystomper

At lunch, I told the students who were there that I am working on a new manuscript in which I am hoping to use humour to help me explore a tough topic. That led us to a discussion of sarcasm. A student named Kaelly gave me a fun example of sarcasm. Kaelly's twin sister worries about her a lot, so this morning on the bus to school, when Kaelly's sister asked Kaelly whether she had remembered to bring her lunchbox (which Kaelly did remember to bring), Kaelly told her, "No!" Just to bug her sister! It's a small example, but I like it... so thanks, Kaelly, for this tidbit, which just might find its way into my new story.

Speaking of thanks, a big thank you to the students today for working hard and being attentive. Thanks also to your teachers and to Mrs. Murphy for making me feel so at home. I had a wonderful day with you guys!

Some Days You Get Just What You Need... Visit to C...
Back to the Source of of Inspiration: Heritage Reg...

It turns out W broke a part of his arm

william stanford has aa fracture and is getting a cast

Well, I sadly didn't have the time to come and see you, but I know my twin talked to you. Kaelly can be a great deal of annoyance when it comes to sarcasm. You should ask her to help you with the sarcasm in your book!

0 Cancel Reply
Well, I sadly didn't have the time to come and see you, but I know my twin talked to you. Kaelly can be a great deal of annoyance when it comes to sarcasm. You should ask her to help you with the sarcasm in your book! :p
Cancel Update Comment
First Page Previous Page 1 Next Page Last Page