Some Days You Get Just What You Need... Visit to Centennial Academy 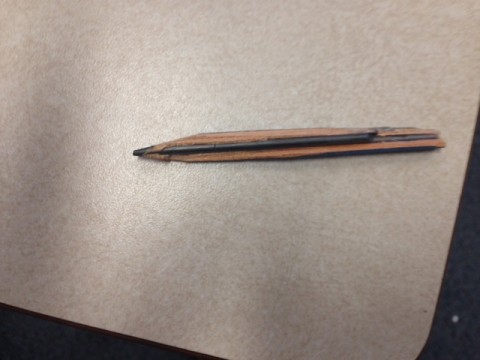 I'm calling today's blog entry "Some Days You Get Just What You Need" because that's the kind of day I had at Centennial Academy. This was my last school visit until the fall and well... what I needed... was laughter and an appreciation for stories. Let me give you some background -- I recently started work on a new book project and I've decided to tackle a sad, difficult topic. But I know that if I want my story to work, it will need humour. So I've been trying to think up characters who are funny. Then lucky me -- I got invited to work with some very funny and FUN grade eight students at Centennial.

My invitation to speak at Centennial came from Miss McNaughton -- we met when she was teaching in Nunavik! But I worked with Miss Byron's English classes. One of the best things about Centennial is that classes are small and so it's possible to really get to know the kids.

Here's some of the things they came up with that made me laugh. I was telling the students that writers need to be OBSERVANT. For an example, I pointed to a student named James who had kicked off his shoes. I asked James, "Can I take a picture of your shoes?" and he answered, "It's not the first time someone's asked me that!" (I was so busy laughing at James's comment that I forgot to take the picture. Instead I settled for a picture of a weird pencil, which I'll tell you about a little later....)

A student named Dario also cracked me up when he put on a British accent and said he sometimes likes to pretend to be an imaginary person named General Bobo. This was especially funny to me because I call my cat (whose real name is Ninja) Bobo -- but now I'm going to call him General Bobo instead. You know what, Dario? Ninja (aka Bobo) was out before and when I called him in using his newest name "General Bobo," he came right home!! (I think he feels like he is getting more respect!!)

I also laughed after I told students that according to research, IT TAKES THREE WEEKS TO FORM A GOOD HABIT (I was talking about writing in a journal) and a student named Elle asked, "Is it the same for bad habits?" When I asked Elle if she had an example of a bad habit of her own, she said it was never hanging up her wet towel -- and that drives her mom crazy. Elle, summer's coming -- and I think it's time to start a new good habit. HANG UP YOUR TOWEL!!

My favourite funny line today also came from James. I asked the class to come up with words to describe himself and James said: "I'm socially awkard and so is the whole grade!" That made me laugh really hard and made me happy too. There's nothing healthier than being able to laugh at ourselves. As I told the students, I was a socially awkward teenager myself and now I'm just happy to be me. It took me many years to get this comfortable -- but I'd say James is well on his way.

Now you are wondering why I posted a photo of a strange pencil. That's because in the second class, I observed a student playing with this pencil. I learned the pencil belongs to another student, Jordan. I've seen many pencils in my day, but this is the strangest. It looks like it was run over by a tractor. I think someone should write the biography of this sad pencil. Maybe even the autobiography!

I want to end this blog entry with a little story: I told the students that my novel What World Is Left is based on the story of my mom's real-life experience in a Nazi concentration camp. This led a student named Michael to say, "What you just said hits close to home." Then Michael told me his grandfather who lived in Morocco also has stories about the war years. On his way out of class, Michael said, "I want to be a game developer, but I might write as a side thing" -- but the real end to my story happened about an hour or so after I left Centennial. That's because I went over to check on my parents. While I was there, the phone rang and I heard my dad talking to one of his neighbours. You'll never guess who she was?

Isn't life full of stories -- sad ones, happy ones, ones we will never forget? I couldn't have had a happier, more satisfying school visit to cap off a busy school year. Special thanks to Miss McNaughton and Miss Byron, also to my friend and fellow writer Elise Moser who came to hear my second presentation today (I showed the students her amazing YA novel Lily & Taylor), and to the students for making me laugh and think. If my new book book project turns out well, I'll have to thank you for the inspiration!

I have promoted myself to captain general commander Billbo Bobo

Guess what, someone asked to take a picture of my shoes again

0 Cancel Reply
Guess what, someone asked to take a picture of my shoes again:D
Cancel Update Comment

i still havent taken the towels off the floor i wonder if mold has started to grow?

0 Cancel Reply
i still havent taken the towels off the floor i wonder if mold has started to grow?
Cancel Update Comment
First Page Previous Page 1 Next Page Last Page