Ever have one of those days that just zipped by? Well, that's what happened to me today at Parkdale School in Ville St. Laurent, Quebec.

Do you remember when I told you about my beloved Grade Five teacher Sharon Browman who helped turn me onto writing? Well, today I worked with Mrs. Browman's daughter Linda Shetzer, who teaches Grades Five and Six at Parkdale. Talk about coming full circle!

I had a full day with Miss Shetzer's students and I'll be working with them again tomorrow, too. First of all, I have to say they were perfectly well behaved. They didn't even need my pep talk about body language the way most students do!! Also, they recently finished a major unit about the Holocaust and so they were well prepared for when I talked about What World Is Left.

There was time, too, for some writing exercises. I asked students to imagine two characters who are totally different and to "see" them in some situation. I asked students to close their eyes and relax while they did the imagining part. Then they had to open their eyes and start writing. Many of them came up with interesting stuff. Zarmal imagined two girls -- one nice and one nasty -- meeting in a shop. Samantha imagined a bratty boy stealing the last seat on the bus, instead of letting an elderly man have it. Brian imagined two men fighting over the diesel pump at the gas station. Brian told me he actually once saw a similar fight. "But I'm adding my imagination," Brian explained. I was most impressed by the way Brian was combining fact and fiction -- a sophisticated technique for a guy in Grade Six!

I told the students how sometimes, when the writing is going very well, I can hear my characters talking inside my head. Adam told me this happens to him, too. Here's what he said: "I'm writing a graphic novel with my friend Ian. Sometimes I hear the characters speaking and it gives me ideas!" So here's to imagination, voices in our heads and lots of ideas!!

Oh and have a look at today's picture -- that's Miss Shetzer checking out her students' work during one of my writing exercises! 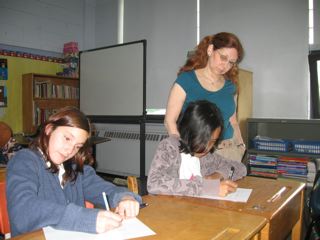 Tweet
The Boy in this Picture is Not Sleeping!
Tea Time