Spending My Birthday With Antonine Maillet 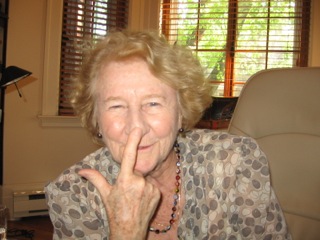 Lucky me! I am spending my birthday afternoon with wonderful fun super-talented Quebec author Antonine Maillet. She is the only author I know who has a street named after her. (Apparently, this is quite confusing for cab drivers. ("You live on Rue Antonine Maillet? But what did you say your name was?")

I'm interviewing Antonine live on-stage this afternoon for a meeting of the St. James Literary Society. We had a pre-interview last week and almost as soon as Antonine answered the door (on Rue Antonine Maillet), I had the feeling I'd known her forever... and not just because I'd been reading (en français, her powerful book, La Sagouine, which is narrated by a feisty, outspoken cleaning lady).

Antonine told me many interesting things about herself and her work as an author. I'll have more to tell you after this afternoon's interview (look for another entry later this week). But for now, I'll tell you my favourite thing she had to say -- and it has something to do with today's rather unusual photo. Antonine and I were discussing the role of imagination in writing, and I asked whether she had tips to help the average person improve his or her imagination. Antonine's answer was "Le pif!" and she pointed to her nose when she said it. Then she explained that the sense of smell can help a writer (or anybody else for that matter) return to old memories. She also said, and this pleased me very much, that a writer needs to have "a nose for people."

Antonine sets most of her stories in French New Brunswick, where she was raised and where she still spends her summers. "I write what I know and what I don't know that I know. My inspiration comes from here," she said, tapping her chest, "from my inside."

I'm going to pick up Antonine so we can drive together to this afternoon's event. Lucky me that I get a little more time with her on this beautiful perfect May day in Montreal!