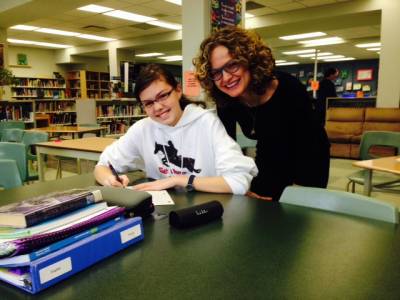 I'm sure you've heard of a home-awy-from-home -- a place you feel so comfortable it feels like home. But I think I might have just invented the term "school-away-from-school." That's how I feel about St. Thomas High School, where I've done author visits for several years now. And this year, I'm doing four days of writing workshops with Grade Nine students at the school.

In today's pic, I'm standing next to Katarina. I met with four classes today, and Katarina was in my second group. When I told her class that reading and writing have both saved my life -- that they've always helped me get through my hardest times -- Katarina caught my eye, and I knew she was what Lucy Maud Montgomery would call "a kindred spirit." As Katarina told me afterwards, "Reading helps keep me calm. The people in my house are sometimes hot-tempered." You'll notice that Katarina is wearing a sweatshirt with a horse on it -- which led me to ask if was into horses, which led to my discovery that Katarina has two horses! See what happens when you're snoopy like me!!

I'll get to meet with the grades nines I'm working with twice -- today was mostly introductory material... I told the students how I got into writing and shared my favourite writing tips. In our next sessions, I'll get more into the nitty-gritty and give the students some writing exercises.

If you've been to one of my writing workshops, you'll know I have a special fondness for TROUBLE which I believe helps to fuel stories. So I laughed when a student named Michael called out, "Trouble happens to be my middle name." Don't you think that would make a great book title?

One of my favourite questions today came from a student named Maathangi. She asked, "As a writer, shouldn't you not stick to routine and isn't it better to write when you feel spontaneous?" I liked the romantic sentiment behind the question, but as I told Maathangi, I don't think there's much that's romantic about writing. If I only wrote when I felt spontaneous, I'm afraid I wouldn't get much done! I think discipline has a lot to do with writing. The trick for me is to write when I don't feel like writing!!

I'll be sticking around in the library at St. Thomas for lunch on my workshop days -- that way I'll have time to work one-on-one with students who are especially keen. Today, I had four delightful visitors. Christian has a great idea for a modern re-telling of a popular kids' story. Here's how Christian described himself to me: "I'm a guy who can turn a small story into something giant." Christopher, I say go for it -- and I love your idea. William is writing a fantasy with an unlikeable protagonist. I told William that's a great idea, too, but I suggested that by the end of his manuscript, readers should change their minds about the protagonist -- that once we know his story, we should like him more. Teague is a member of the Glenmore Curling Club and he'll be competing this spring in the Jeux du Québec -- I suggested he take notes for a book about teens and curling. As I told Teague, I've never seen a book on the topic and I have a feeling it would catch the interest of young readers (and older editors!). And Lauren is writing short stories about monsters. She wanted some tips for beginning her stories and I suggested she start some place dramatic, or with exciting dialogue, or with a funny incident.

You might think I'd be tired after four sessions today, but instead I'm feeling energized and inspired. That's what happens when I get to work with bright, open young people. Thanks you guys for being a great audience, and to your teachers, Mr. Cloney, Miss Ditchburn, and Mrs. Puliatti, for sharing you with me today. And special thanks to librarian Mrs. Pye, who over all these years, has become my friend. Long live stories and books!!