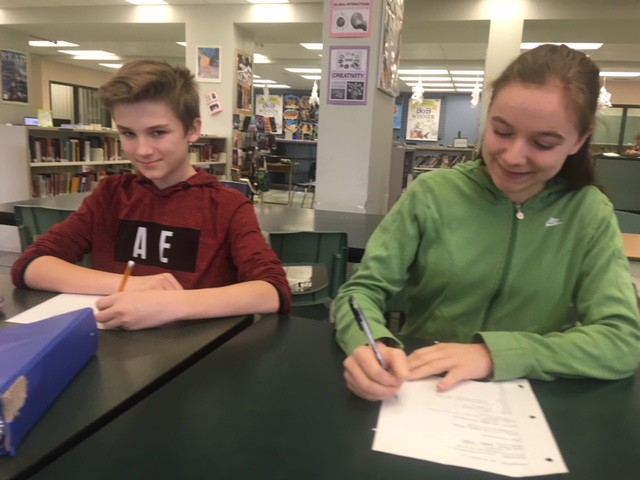 I'm just home from the last of my four days of writing workshops at St. Thomas High School. In today's pic, two students are demonstrating ideal body language (one of my favourite subjects) for when an author pays a visit. Meet Daniel and Cordelia (don't you LOVE the name? Cordelia was the best sister in Shakespeare's King Lear.). Notice how both students' pens are in position so they can take notes? Also, do you notice all the stuff that Cordelia wrote down? Evidently, she learned A LOT!!

When Cordelia was packing up her books, she told me we had met last year at the Los Angeles Airport! It suddenly came back to me that I'd had a lovely conversation with her, her mum and her sister. Though I must not have learned her name, because I'd definitely have remembered meeting someone named CORDELIA!

Today, I worked with four groups of Grade Nine classes. I started with Mr. Katz and Ms. Puliotti's groups. Just as I was starting, there was an announcement over the  PA system: "Bus 82 is arriving late." Well, my brain went right into WHAT IF? mode. (I'm always telling students that asking WHAT IF? is a great way to move a story forward.) What if there was an outbreak of a terrible virus on Bus 82? What if all the infected students were about to enter the library where I was doing my workshop? (I must admit this WHAT IF? scenario may have been inspired by the fact that I am coming down with a cold.) Anyway, a few minutes later, some new students turned up. Now was my opportunity to demonstrate another important part of being a writer: DOING RESEARCH. I asked a student named Alex whether he'd been on Bus 82. He had! Then I got him to tell us the story of what had happened: "The first bus broke down. Then the second bus broke down. We had to wait in the parking lot at Walmart." Interesting, no? Don't you think you could all that for a jumping off point for a novel? Add a little trouble -- and see what happens!

Oh, it was another day for trying out a new writing exercise. Unfortunately, I can't take credit for this one! Credit goes to Mr. Katz, who suggested it to me before the workshop: "Why don't you ask the kids to write about their memory of their first day at high school?" We got great results! Thanks, Mr. Katz. I promise to credit you whenever I use your exercise in the future!

A student named Max wrote about something edible: "the taste of the first cafeteria cookie -- sweet and good." Anjolie remembered how a teacher got upset with her for talking out of turn. "He said, 'Take your shoe and sock off and stick it in your mouth!"

I spent the next periods with Ms. O'Neill's classes. A student named Hassan asked, "Do you ever run out of ideas in general?" I told him NEVER. I am a talented ideas-getter. It's the writing that's difficult!

I talked to Ms. O'Neill's students about SECRETS and how they should try to uncover the secrets in their own families. One student (I'm keeping him anonymous on purpose) stayed behind to tell me the following family secret: "When my dad was 25, he learned that he had a step-sister in Europe." That's quite the secret! WRITE ABOUT IT, SIR!

I ended the day with Mr. Cloney's class. We did Mr. Katz's exercise (see, Mr. Katz, you're credited!). I asked a couple of students for permission to share what they wrote. Victoria remembered feeling "embarrassed because all the kids had phones and I didn't." Excellent start of a story, Victoria! This is how Kyleigh started her paragraph: "I was 20 minutes late because my step-dad brought me to school on his motorbike." Whoo! You've got several interesting stories happening there, Kyleigh. And I definitely want to keep reading!

I'll end today's blog entry by telling you a little about something else a student wrote -- the student and I decided to keep his name confidential too. He wrote down three words: "angry and sad." Then, he explained, "It's a story I can't write about." Here's what  have to say to that: YES YOU CAN, YES YOU SHOULD, YES YOU'RE READY OR YOU WOULDN'T HAVE WRITTEN THAT. CHANGE WHATVER HAPPENED UP SO THAT IT'S LESS ABOUT YOU. MAKE IT ABOUT A DIFFERENT KID. USE THE DIFFICULT THINGS YOU HAVE EXPERIENCED TO INSPIRE YOUR WRITING. THAT'S WHAT ALL OF US WRITERS DO!

How's that for a lively end to my four blogs about visiting St. Thomas? Special thanks to librarian Mrs. Pye for organizing the visit; to librarian Miss Suzanne (Suzanne Halton-Thom) who runs the library on Mondays, for hosting me today and last Monday and for giving me your top-of-the-line Bell Canada ballpoint. Thanks to the teachers; thanks to the kids who came to hang out with me at lunch to show me their work; thanks to my friend, Baie D'Urfe city counselor Wanda Lowensteyn, for whisking me out for a break; thanks to all the kids I worked with for being wonderful. I already miss you guys!