Sweet Start to the Week at Evergreen Elementary 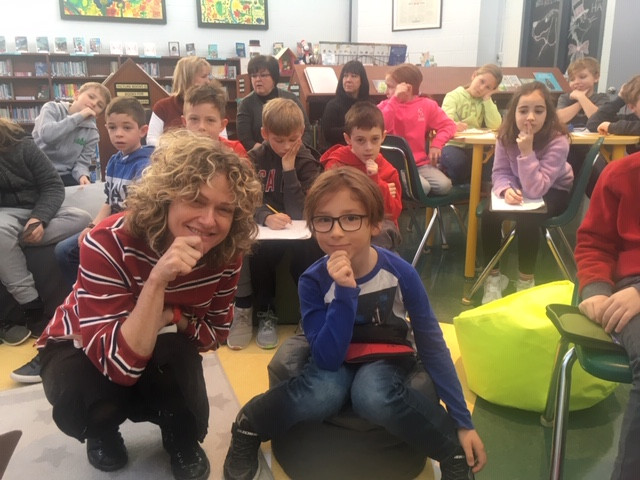 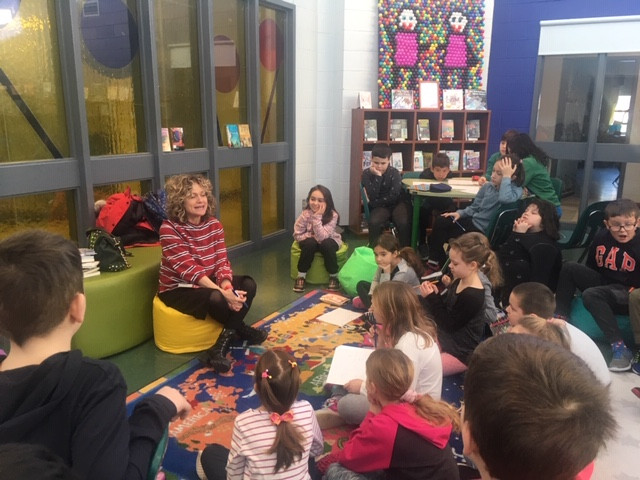 You don't have to be old to be smart! That's what I was thinking this morning during my visit to Evergreen Elementary School in St-Lazare.

If you know me, you know I'm obsessed with body language. (Teachers need to understand body language to manage our classes; writers can use body language to let readers learn more about our characters.) When I was working with the Grade Three's, I noticed a student named Tevin who was in perfect what I call "thinking position." (That's Tevin with me in the first pic. Notice how he is resting his chin in his hand. Admittedly, Tevin's glasses also make him look extra-smart!) You know what Tevin told me? "I'm always thinking!" Way to go, Tevin! Keep all that thinking up ...and here's a thought: maybe you should put some of your constant thinking into writing a book!

When I was discussing the importance of re-writing, a student named Rowan commented, "You have to try it once, and then do it over and over again until you like it." Precisely, Rowan, and nicely put! When we talked about how writers have to be readers (writing and reading go together like siblings or cousins), Nathan and Anais both told me they read every single night. Anais added, "I have a clamp light from Ikea." I thought that the clamp light from Ikea was a lovely detail -- and a good example of how the right details can help bring a story to life. Can't you just imagine a girl named Anais reading late at night, underneath the yellow light from her clamp light?!

I showed the students the ARC (which stands for Advance Reading Copy) of my spring non-fiction book, I Am A Feminist: Claiming the F-Word in Turbulent Times. Some of the kids knew what feminism was, but others were less sure. Which led a student named Lucien to ask one of my favourite questions of the day: "Is it true a man can rob a bank better than a woman?"

Of course, you'll want to know my answer! I told Lucien that I thought bank-robbing was a bad plan for anyone, no matter our gender. But, that being said, I told him that if a woman really had to rob a bank, well, I'm sure she'd be just as good at it as a man!!!

After recess, I worked with the Grade Four classes. I'd met most of these students when I visited Evergreen last year, so I did a quick review of my writing tips, and then moved on to new subjects. Because these students are just the right age for my Princess Angelica chapter book series, we talked a lot about how I got the idea for the first story, and about the upcoming books in the series. I explained that I found my inspiration for Princess Angelica, Part-Time Lion Trainer, which is coming out this spring, at the Ecomuseum, a place that many of these students have visited, because it's near their school.

I also told the story of the monkey man charm I wear every single day. That charm has also inspired a book -- my first picture book! A student named Connor raised his hand to ask me an important question: "Are you going to keep the monkey man in your casket?" It took me a moment to realize that Connor wanted to know what my plans were for the monkey man charm after my death. Good question, Connor! I told him I'd rather give the charm to my daughter or to a museum. No sense in burying it!

A student named Hzaz asked me a question that made me super happy. He asked, "Is it normal when you go to bed, to have all these thoughts for a book?" I told Hzaz that I don't know if it's normal, but it's GREAT... and that HE IS DEFINITELY A WRITER. What you need to do, Hzaz, is write all those ideas down so you can use them in your books!

Later, when we were talking about grief, a student named Stuart told us about his guinea pig, Snowy. Snowy died on Mother's Day. Stuart asked, "Why did he have to die on a holiday?" It's a sad story, Stuart, but you should write about it. Try to capture not only how much you miss Snowy -- but also how much you loved him, and what made him a special guinea pig.

So I think you can figure out why my morning was sweet. Thanks to the teachers for sharing your kids with me, thanks to librarian Tina Hausen for arranging today's visit, and thanks to the kids... for stealing my heart.

Hi Monique I always love that you come to schools and teach us how to be great righter. I’v been working on a book and I will send you the book when I’m done.Can you give me some pointers.

0 Cancel Reply
Hi Monique I always love that you come to schools and teach us how to be great righter. I’v been working on a book and I will send you the book when I’m done.Can you give me some pointers. Love Emma Goudreau
Cancel Update Comment
First Page Previous Page 1 Next Page Last Page