"Tell Me A Story! Youth Literature and the Holocaust" 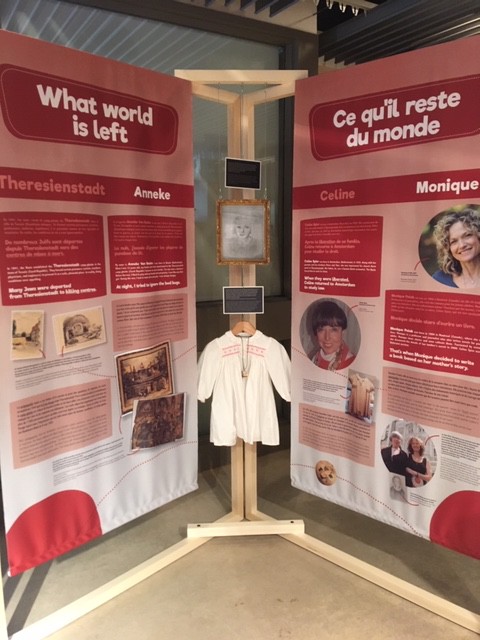 "Tell Me A Story: Youth Literature and the Holocaust" is the name of a traveling exhibit that will be making its way across  Canada. It's now in Montreal, on display at the Cote des Neiges Library.

I was there this morning for the inaugual event. Grade four students from the nearby Ecole Les Petits Chanteurs de Mont-Royal came to see the exhibit and do a little writing workshop with me.

The exbibit tells the story of five youngsters whose lives were affected by the Holocaust. All five youngsters' stories were used in works of literature including Karen Levine's Hannah's Suitcase and Anne Renaud's Fania's Heart. My novel, What World Is Left, which is based on my mum's experience during the Holocaust, is also part of the exhbit.

It was very moving to see the gorgeous display, put togteher by the Montreal Holocaust Museum under the careful direction of Isabelle Goudou. Because I was busy with the writing workshops, I'll need to return ASAP to have a closer look at all of the display panels and the video presentation.

Alice Herscovitch, director of the Montreal Holocaust Museum, welcomed the young visitors. I loved what Alice told them: "The idea of this exhibit is not to frighten you, but to inspire you to have courage. Everybody has to change the world a little bit."

Alice's remark gave me an idea for the writing exercise I did with the students. (Don't worry, I gave them writing tips first -- I always give writing tips!!). Afterwards though, I asked the students to write about a time in their lives when they needed to summon courage. The students gave me permission to quote from their work. They attend a French school, so the workshop was in French, and they wrote in French too -- but for those of you whose French isn't strong, I'll provide translation services!

Ernest wrote, "Je jouais avec mes amis, Une dame est venue nous crier dessus et elle nous a dit, 'qu'est-ce-que vous faites dans mon jardin?" Which means that Ernest and his friends were playing when a woman started shouting at them, "What are you doing in my garden?"

I told the students how many of my stories begin with truth (either I do research, the way I did with my mum's story, or I use my memory, the way I had the students do this morning.) But then I add an important ingredient: IMAGINATION. What if, for example. the angry woman in Ernest's story had phoned the police, and what if the boys ran away, and what if the police caught up with them and hauled them down to the police station? See! We just started to develop a story.

The most important part of today's visit was of course the exhibit. But hopefully, I gave the students something to think about too. And also, I can't resist telling you that there was a CTV reporter covering the event. HIs name is Julian McKenzie! Amd guess what? Julian was my Journalism student at Marianopolis College six years ago? If I sound proud, it's because I am.

If you're in Montreal, go see the exhibit!! And if you're elsewhere, I hope it'll make a stop near you.