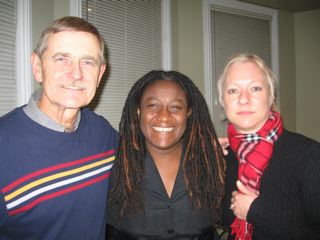 This is a big week for Canadian elementary and high school students. That's because it's Canadian Children's Book Week and a team of writers and illustrators are traveling across Canada to visit schools in every province. Several writers are in Quebec. Last night, I went to meet Alberta children's author David A. Poulsen. The event was organized by Carol-Ann Hoyte (in today's top pic, you can see David, then Carol-Ann, then local children's author Joyce Scharf). In the second pic, you'll see David with Jill Murray , another popular local children's author.

David has written 21 (or 22 -- he didn't seem to be quite sure!) books for kids. He's the author of the popular The Salt and Pepper Chronicles. Some of his other books include the YA novels Last Sam's Cage and Numbers.

But what I really want to do in today's blog entry is tell you some stuff about David that might inspire your own writing. He says he was always writing, even when he was a little kid: "I really liked what books did for me -- took me to new places and introduced me to new people." David says his life changed in 1984 when his short story "The Welcoming" won a prestigious prize. He explained that "The Welcoming" is based on a story his own mom told him about witnessing the return of Canadian soldiers after the Battle of Dieppe. (Which goes to show you the importance of holding on to those stories that are part of our growing up.)

David says he doesn't rely much on outlines. But, like me, he gives himself a daily quota. (His is 1,000 words -- I'm sometimes a little easier on myself, especially on teaching days.) Because David lives on a ranch, he starts his day with chores, then reports in to his computer. Though he doesn't do much outlining, David does a lot of character profiling, spending a lot of time developing characters before officially beginning his books. Another thing I thought was super interesting is how David goes about doing his research. For a series of books set in a high school, David actually re-enrolled in high school, spending three weeks there. "I can't sit from here," David explained, "and write a book about what it's like in high school." Similarly, for his book Last Sam's Cage, which is about a young offender, David spent time locked inside a remand centre.

Here's wishing David, and all the other touring authors, a super book week. And here's wishing Canadian schoolkids that you have fun and gets loads of inspiration!

By Golly, I Won!
Special Day with Special Students