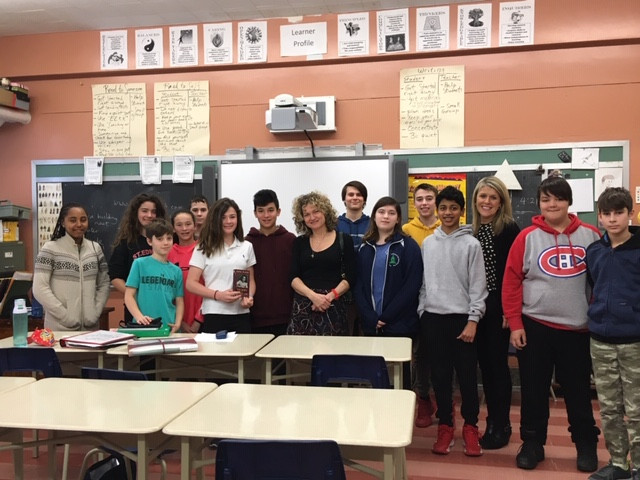 You may know that I teach CEGEP here in Montreal and that I do a lot of school visits -- mostly to high schools, where I work a lot with students in the higher grades. But my morning at St. Thomas High School reminded me that I have a special fondness for Grade Sevens. I can't quite tell you why. Maybe it's because Grade Seven was a pivotal year in my own life; it's when I decided I wanted to become a teacher and a writer. Twelve going on thirteen is also the age my mum was when she entered Theresienstadt, the Nazi concentration camp where she spent nearly three years. So, this morning, when I looked out at the three Grade Seven classes I was working with, I thought a lot about my mum and her story (which inspired my historical novel What World Is Left).

So, how about I tell you some of the most interesting things that happened with Miss Scott's classes this morning?

I was talking about body language with the first group when I noticed a student named David twiddling his pen. When I pointed out the twiddling, I noticed that another student named Muhammad was smiling and leaning in towards David. Clearly, Muhammad was enjoying the fact that I was teasing David. And as it turned out, the two boys are friends. I also learned that David was twiddling because he was tired. So, being snoopy (an important trait in a writer!), I asked David what had kept him up so late last night. Guess what he told me? THAT HE WAS READING A BOOK -- THE BOY IN THE STRIPED PAJAMAS. Great news, David! Twiddle away!

In the same group, when I talked about What World Is Left, a student named Cynthia asked, "Did your mum feel better after telling you her story?" My mum didn't want to share her story; she'd kept her experience secret for more than 60 years. But as I told Cynthia, my mum definitely feel better after sharing the experience. For one thing, she'd been a bad sleeper most of her life, but after telling me about what had happened to her during the war, she began sleeping better. Finding out my mum's story also did a lot to improve our relationship. It's hard to feel upset with a person once you know what they have been through.

Today's pic was taken at the end of my workshop with Miss Scott's second group. You may notice that one student is holding a book -- The Diary of Anne Frank. The student is Danica, and she pulled that book out from her desk when I told her class that my mum knew Anne Frank. My arms got tingly (they tingle whenever something amazing or interesting happens) when Danica showed me the book.

During the second class, I also met a student named Pearla. It's a name I'd never heard before and I wrote it down for my list of possible names to use in upcomig books. Thanks, Pearla! (Actually thanks to your folks for coming up with the cool name!)

I had lunch in the library, where I met with a few students to chat one-on-one about writing. I was impressed by a student named Peder who is half-Norwegian and half-Inuit. What a cool mix! Peder told me he is working on a book inspired by George Orwell's 1984. In fact, a couple of weeks ago, Peder had what he described as, "a vivid nightmare of a 1984 world." I told Peder to write all the details down before he starts to forget them. Interestingly, the characters in Peder's dream were all gender neutral. Use that in your book too, Peder! Peder had been in the second class I taught, and when I asked him if he learned anything from my talk, he told me: "I learned I should read and write more. If I ever write anything, I want to revise it over and over. I want to learn people's stories. I want to know." Peder, you made my day when you told me, "I want to know."

You'd think I couldn't possibly have had three wonderful classes in a row... but I did. Miss Scott's last group was the liveliest of them all -- in fact, I had to ask them to STOP asking questions (so sorry, you guys, but we only had 45 minutes together... why don't you go ahead and ask me some questions here in the comments section?!!). My favourite moment during this class was when a student named Evan asked  me, "Do you find it easier to write when it's based on something you actually feel?" Okay, Evan, you may only be in Grade Seven, but that is a super sophisticated question. And you know what else? I think your question touches the very heart of writing fiction. Good fiction doesn't have to be based on true events -- but it definitely has to be based on TRUE FEELINGS.

I'll be back for two more writing workshops at St. Thomas. I'll do my best to stick around for lunch. That's because I'd like to see what writing might emerge from this morning's workshops.

Thanks to my friend, librarian Mrs. Pye for the invite; thanks to Miss Scott for sharing your students (and from bringing my lunch in the library); and thanks to the kids for being wonderful, inquisitive and bright Grade Sevens!

Thank you for coming. ?

Thank you for coming!!!!

Thanks for coming to our class! It was fun. Your book What World Is Left is really good

0 Cancel Reply
Thanks for coming to our class! It was fun. Your book What World Is Left is really good :)
Cancel Update Comment

Thank you so much for coming! It was a very pleasant visit and I enjoyed it greatly. I learned quite a few things about writing thanks to you!

0 Cancel Reply
Thank you so much for coming! It was a very pleasant visit and I enjoyed it greatly. I learned quite a few things about writing thanks to you!
Cancel Update Comment

Thank you so much. I really enjoyed your talk. Now I am righting alot more.?????