HOW DID MONIQUE GET INTO WRITING? 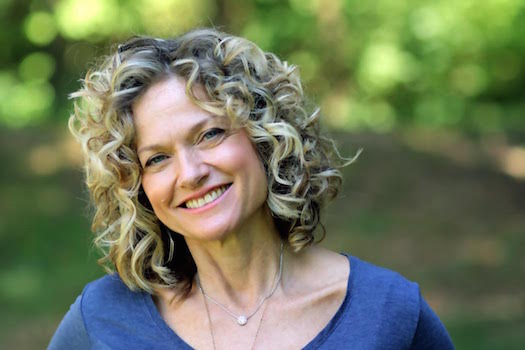 Monique knew from a young age that she wanted to do something creative. She would have liked to follow in her grandfather’s footsteps and become a painter, so for her tenth birthday, she asked for an easel and a book about painting. She got the easel and the book, but discovered she was not very good at painting – so she decided to become a writer instead, because she’d always loved inventing stories.

Monique adores stories – this includes not only stories inside books, but also stories people tell. When Monique enrolled as an undergraduate student at McGill University in Montreal, it seemed natural for her to study English Literature. She did her Master’s degree at Concordia University, where she wrote her thesis about Lewis Carroll’s books Alice’s Adventures in Wonderland and Through the Looking-Glass.

But studying the great authors left Monique feeling a little overwhelmed. Though she never stopped writing diary entries and letters to friends and relatives, it would be more than 10 years before she began writing professionally.

Monique’s writing career began with journalism. She sold her first piece – a book review – to the Montreal Gazette in 1991. Since then, she has written for almost every section of the newspaper, including city news, entertainment and lifestyles, travel and even business.

But what Monique really dreamt of doing was writing a novel for young adults. But breaking into the children’s writing market was far harder than she expected. She wrote and rewrote several manuscripts before she made her first sale to Orca Book Publishers. At about the same time, Monique got a phone call from Hadley Dyer, who was, at the time, children’s book editor at James Lorimer and Co. Hadley had read one of Monique’s manuscripts. “It doesn’t suit our needs, but we want to know whether you’ll write a book for us.” Of course, Monique said yes. And so, she went from having no publishers to having two of them!

Monique brings her teaching and journalism experience to her novels. Several of her stories take place in schools, and Monique gets many story ideas from her students. For example, the book Scarred, which is about a young woman who cuts herself, was based on the many stories students have told Monique about their problems with self-mutilation. Monique also researched self-mutilation for a feature story she wrote for The Montreal Gazette.

Two of Monique’s other books, On the Game and All In, grew out of well-publicized newspaper stories. On the Game, which deals with teenage prostitution, was inspired by a shocking case in Quebec City in which girls from seemingly ordinary families were recruited as prostitutes. All In, which looks at the problem of teen gambling, was inspired by events at a private high school in Montreal.

WANT TO KNOW A LITTLE MORE ABOUT WHERE MONIQUE GETS HER IDEAS? 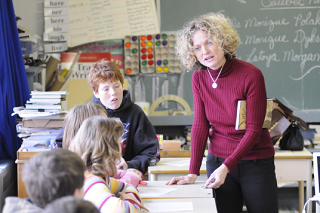 As a freelance journalist, Monique is always hunting for stories. For instance, last summer, Monique wrote a story for the Montreal Gazette about the challenges faced by paramedics. The research she did for that story has worked its way into the new fiction manuscript Monique is writing.

This is not the first time that Monique's feature writing has found its way into her novels. Here's another example: several years ago, Monique was researching a newspaper story about Montreal pet stores. At one of the stores she visited, Monique, who’s a bird lover, met a beautiful cockatoo named Elmo. He inspired her novel Finding Elmo, which happens to be set in… you guessed it…a Montreal pet store.

Monique also gets ideas for characters from real life. For instance, a friend told Monique about a man who has an obsession with making lists – and so she gave this quirky trait to the mom in Finding Elmo. At the swimming pool this summer, Monique met a gentleman named Chester. She liked his name so much that she is hoping to name one the characters in an upcoming project Chester!

HOW DOES MONIQUE GO ABOUT WRITING A BOOK?

Sometimes, Monique uses an outline. Other times, she just goes for it, letting the story tell itself. Monique believes there are advantages to either approach. Having an outline reduces some of the stress associated with coming up with a workable plot. Writing without an outline tends to be a little more exciting.

When Monique is working on a new book, she tries to write five days a week. She sets herself a “quota” – the number of words she needs to write each day, usually it’s between 500 and 1,000 depending on the length of her project and her deadline – and then she stays at her computer until it’s done.

Of course, the re-writing takes as much time, and often more time, than the first draft!

WHAT’S MONIQUE UP TO NOW? 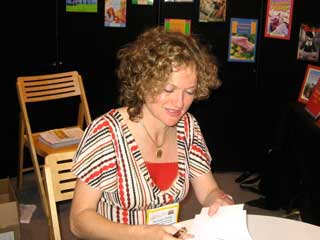 Monique at a book signing

Because Monique can't stop writing, she is already hard at work on another novel. In this one, Monique explores the difficult topic of how kids handle grief. Monique recently finished the first "messy" draft of that project, and she plans to spend fall 2016 on a giant re-write.

For a really up-to-date report on what Monique is up to, check out her blog. And leave a comment. Monique loves to hear from readers!