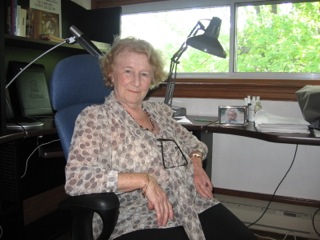 Do you ever notice how sometimes the right person comes along at just the right time? That's how I feel about Quebec author Antonine Maillet.

I had the pleasure of interviewing Antonine on-stage two weekends ago for a St. James Literary Society event. Even though I was the one asking most of the questions, I was also busy writing down her answers. I don't ever want to forget some of the wise things Antonine had to tell us about writing.

Here are some of them! Antonine, who is Acadian, writes about life in French-speaking New Brunswick and she explained how important it is to write about what we know. Of course, she put it better than that! She said, "Every writer -- the smallest, the biggest -- they all have to discuss their particular vision. They are the only ones who have seen that small, little corner of life." She also talked about why she likes to write about simple people, like the washerwoman who is the narrator of her famous novel La Sagouine. "It's because," she said, "the little people are never in literature and they belong in literature." (Hey, if you're one of my Journalism students reading this... remember how we worked on coming up with interview subjects who normally have no voice?!)

Antonine was leaving for a week in New Brunswick the day after our interview, but yesterday, my phone rang and it was HER! She had read my book, What World Is Left (the one that has recently been released in Holland as Een Andere Wereld). Antonine told me she had not been able to put down the book! I said how much her call meant to me, and I told her that I've recently begun working on a new manuscript and am struggling with it, the way I always do when I write.

Tweet
Objects Have Stories Too...
Spending My Birthday With Antonine Maillet