So I've got loads to tell you about Genevieve Cote's visit yesterday to Marianopolis College here in Montreal. Genevieve has written and illustrated many picture books. In 2007, she won the Governor General's Prize for her illustrations in The Little Word Catcher.

Genevieve began her talk by telling us that writing the text for a picture book is far more difficult than most peoplethink: "If there's one sentence per page, it had better be good!" She also talked about how important it is to feel inspired by your subject: "The best way to start is with something that grabs you." It's clear that Genevieve writes about issues that matter to kids -- and to her. She explained that as an author-illustrator, "the closer you get to your own values, the better your work will be."

Though Genevieve's first language is French, she writes the texts for her picture books in English. My students and I were a little surprised to learn this. Genevieve told us she finds it, "easier to write short and punchy in English."

There are many more things I could tell you about Genevieve's talk, but I'll end today's blog entry with something she said about finding inspiration: "You have to get into a state of welcoming ideas." I really love that image -- it reminds me of standing by a door and greeting our ideas when they drop in. "To get into that state," Genevieve added, "you have to start writing!" So three cheers for Genevieve, for doing what she does so well, and for sharing her tricks with us!!

Here's a pic of Genevieve at school yesterday. (She's wearing the black T-shirt... I'm a-grinnin' next to her!) 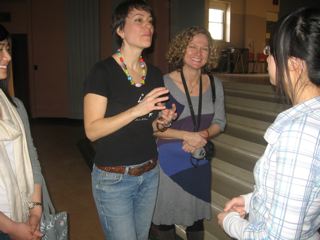 Today I Bring You Tips From a Children's Books' Ed...
What is a Videoconference Anyhow?