Checking in From Inukjuak 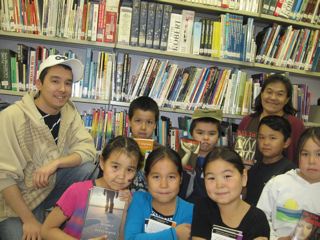 Hello world! I'm writing to you today from Innalik School in Inukjuak, a town on the Hudson Bay in Nunavik. Right now, I'm in Room 220 using a teacher named Crystal's computer. At lunch, I worked on a computer in the staff room and from the window, I looked out on the bay. There's no snow yet on the ground here, but the air has that crisp feeling it gets before the snow comes.

Let me tell you about some of my happiest moments so far.... When I first arrived at the school yesterday, I worked with a group of Grade Three students who happened to be in the school library. I showed them my journal and explained how I write three pages in it every single day. I asked the students (they speak mostly Inuktitut, so they had a translator with them) if they wanted to be writers one day, too. No one answered, but one student named Linette suddenly straightened her shoulders, so I knew that meant yes! I told her she needs to write every day, too, and suggested she might use a smaller notebook than the one I use (that way she could fill the pages more quickly!)

After my morning session today with Inga's class, a student named Samwillie stayed to chat. So did a student named Victor, who'd actually written a moving piece for me about dealing with a troublesome situation. (I told the students that TROUBLE is an essential ingredient in stories, but recommended they try to stay out of trouble, if at all possible!!). Then, just now, in Crystal's class, I worked with several students who seem to really enjoy writing. Bailey expressed her feelings on the page, saying: "I write every day. Writing sometimes hurts, but sometimes it's worth it." I thought that that showed Bailey has a lot of courage, another thing we writers seem to need in order to tell our stories. And another very special person I met is Jennifer, who LOVES READING. And writing!! (Way to go, Jennifer!) Crystal (Jennifer's teacher) just told me that Jennifer is always asking for new books to read. In our workshop today, Jennifer started work on a story told from her grandmother's point of view. I told the students that it can be very satisfying to tell the story of someone we love a lot -- and someone who's survived hardship.

So that's my news for today. I'm off now to do some exploring around town. I hear there's a library that's not part of the school. My plan is to find it and bring over one of my books. I'll be back  "South" (meaning Montreal!) on Friday night... so I should have lots of news for you by then!

P.S.: A little explanation about today's pic: It's the first photo I shot in Inukjuak, when I met those Grade 3 students. The young man at the left is Simeone, who translated what I had to say into Inuktitut; the woman at the top right is Nunga, the school librarian.

Still Flying From My Trip to Inukjuak
Hello from St. Willibrord School