You should definitely meet Edmonton-based kids' writer Natasha Deen! I did!

Here's a selfie Natasha and I took yesterday at the Ontario Library Association Super Conference. 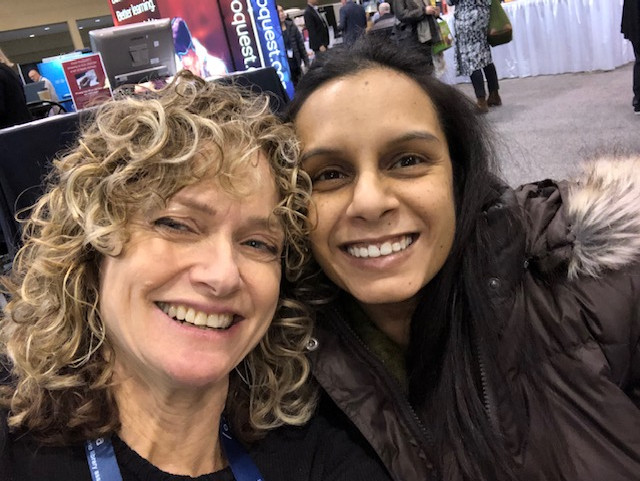 Natasha and I have been virtual friends for a couple of years -- we are both published by Orca Books -- and when we finally met in person, we clicked!

Also, because I'm always thinking about YOU, dear blog reader (and also about my Writing for Children students at Marianopolis College), I did a mini-interview (I wrote my notes on the back of an envelope!!) with Natasha and gleaned some useful tips!

Natasha is the author of 17 books, including In the Key of Nira Ghani (Running Press), which is up for the Red Maple Award! The novel is about a Guyanese immigrant. Natasha comes from Guyana too. When I asked if Nira is based on her, Natasha told me: "She's like the me I hoped to be. She's a lot sassier than I was!"

It turns out that Natasha is drawn by sassiness! She told me she is working on several projects now ("because," she said, "you never know what'll stick to the wall." One of those projects is about a kid and a senior citizen. It turns out the senior citizen is based on another sassy person in Natasha's life -- her mother-in-law who died in 2016.

I was just telling my students last week that authors tend to draw on real-life memories, sometimes transforming them in their stories. Natasha told me she has included a scene in her work-in-progress that was based on something she really saw her mother-in-law do: get into a tug-of-war over a green basket at a super store! "I remember she had a muppet scowl on her face," Natasha said. The funniest part of the story is that the man involved in the tug-of-war was so much taller than Natasha's mothr-in-law he didn't realize what was going on!

What I like so much about this story is that it's not only funny, but that it's also full of love and respect. And it celebrates sassiness.

I'm looking forward to reading Natasha's books. Hope you are too!

More posts from author
Tuesday, 27 September 2022 The Moniques are Back!
Monday, 19 September 2022 Back in CEGEP -- with Gazette Columnist Allison Hanes
Tuesday, 31 May 2022 Good to have OPTIONS!