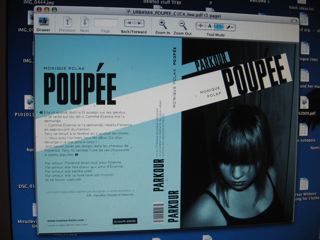 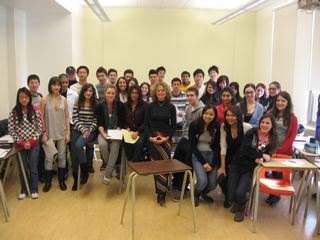 In today's pic, you'll meet my "Stuff of Nonsense" Humanities class. They're my Monday and Wednesday 8:15 group. They look pretty lively, don't they -- especially for such early-risers?

I bet you are wondering what in the world happens in a course called "Stuff of Nonsense." Well, we study the underlying meaning of nonsense. Today, we analyzed a joke about a teen and her mum. I warned the students in the class that by about Week Four of this term, they will no longer be able to simply laugh at a joke -- that's because they'll be ANALYZING it. In other words, I'll be ruining jokes for them. (Not to worry -- it's only a temporary effect -- by the end of the term they'll be analyzing jokes and laughing at them at more or less the same time.)

I am also trying to load another pic for you -- it's the cover of Poupée, the French translation of my YA novel On the Game -- due out next month with La Courte Echelle. And it's such a great cover, too. I really want you to see it! Only the file is too big and I am too confused to figure out how to make it smaller. I JUST FIGURED OUT A WAY TO DO IT. (I'll admit it's not perfect photography on my part, but hey, I get points for effort and endurance!)

That's it for today's blog entry. I've got to go read and write!!

Lots to Tell You About My Day at Honore Mercier Sc...
Happy Day at Rosemere High School