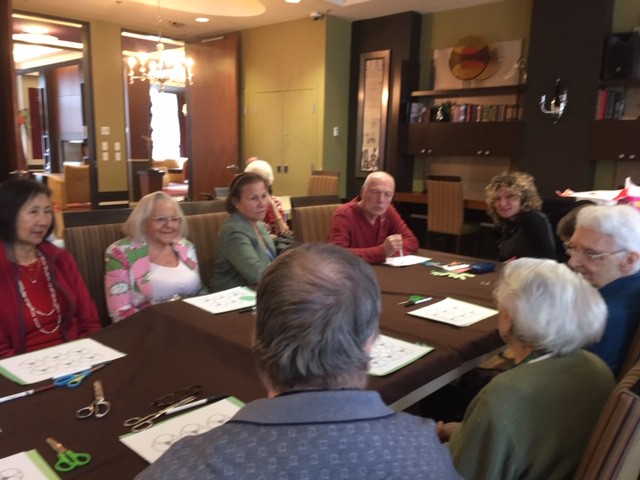 I've been making the rounds of seniors' centres -- recruiting participants for a seniors' storytelling event that will be part of next spring's Blue Metropolis Literary Festival. On Tuesday, I was at Place Kensington in Westmount. Today, I visited Vista, which is so close to my house that I considered jogging over!

FIrst, I talked a little about the project -- actress Fanny Lacroix and I will be helping seniors prepare their story material. I'll be working on the writing; Fanny's in charge of performance. When Vista's recreation director, Riana Levy, heard more about the project, she came up with a great suggeston: that we get the storytelling started!

It felt to me like we had some natural performers at the table!

Helen Levy, who's 92, told a funny, but also touching story about a woman who was shoplifting at Helen's grocery store on St. Laurent Boulevard. For the culprit, the store represented home. My favourite part was when Helen told us how the women reacted after she was caught: "She put our her hands like this--" Helen raised her wrists in front of her "-- Take me away! Arrest me! But after I get out of prison, I'm coming right back!"

Jim McCormick, who's 71, told a story about something that happened to him when he was a kid. It was a Saturday morning, and JIm was sleepy when he went to collect the Gazette on the doorstep. I don't want to tell you what happened next  -- only that Jim forgot where he put the newspaper. And that it turned up later in an extremely unexpected spot. (Okay, here's a clue, it was in the kitchen -- but not on the counter!!)

Sylvia Stern, who's 97, made us laugh with her account of being a teenager sneaking home one morning at five AM. "How am I going to explain this to my mother?" Sylvia remembered asking herself. Let's just say Sylvia's mom wasn't easy to fool!

And Lilita Kruze, who's 62, told us how her little sister took off one day when the family was visiting Washingotn. "You"re boring!" the little girl told her family members before she disappeared. Luckily, there was a happy ending to the story -- it involved a police station, and a policeman's cap.

So, it's looking as if Fanny and I will be returning to Vista. I'm already looking to more great stories!

Tweet
"Write about what keeps you up at night" -- Visit ...
A New Kind of Classroom