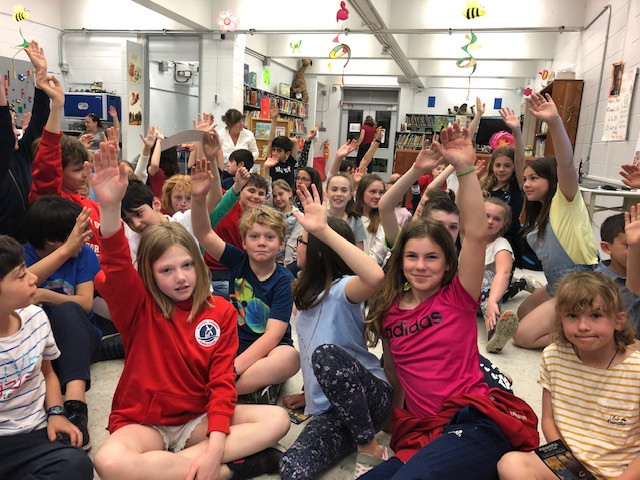 Get ready because I have to lot to report to you today.

First, let me explain about Battle of the Books -- it's a contest in which teams of students answer questions about selected books. For many years, the Lester B. Pearson School Board has been running a Battle of the Books contest for high school students. This year, for the first time, Lester B introduced the battle at the elementary school level. Teams of Grade Four students from ten schools read a dozen books, and competed by answering questions about those books. The three winning schools were: St. Edmund Elementary, St. John Fisher Senior, and Margaret Manson Elementary. And you'll NEVER GUESS WHAT THE PRIZE WAS!!

(I'm chuckling over here. That's because it's the first time in 59 years that I have been a PRIZE!)

Today, in order to deliver the prize, I did writing workshops for the Grade Four classes at the three prize-winning schools. As you can imagine, I have a lot to report. I'll try to share some of the highlights of my action-paced, super-fun day!

I started out at St. John Fisher Senior in Pointe-Claire, where I worked with 106 students! I managed to get a lot done in 75 minutes -- I covered all my writing tips! A student named Rhys told me, "Sometimes when I don't go to the park, I take paper from school and write stories." And a student named Chloe told me, "I'm writing a thing called My LIfe and I'm on the sixth paragraph." I love hearing about young people who are already hooked on writing. If you guys take writing seriously when you are in Grade Four, imagine how good you'll be when you are my age!

Today's picture was taken at St. Edmund (also in Pointe-Claire), which by the way, won first spot in the Junior Battle of the Books. Here, I met many interesting students, including Ben, who introduced himself to me by saying, "I'm a historian," and Jack, who told me that, "I wrote a book that has nine pages."

I ended my day at Margaret Manson in Kirkland. You'd think I'd have been exhausted by then, but the students were so wonderful and focused that they re-energized me! Special shout-out to Dorothy and Sidney who came to greet me at the school office, directed me to the bathroom, and who offered me any beverage should I be thirsty. Jokingly, I said, "Have you got vodka?" -- and I was happy when they cracked up!

A student named Philip wanted to know, "For good writing do you mean writing that isn't messy or writing that has good ideas?" I told him the answer is definitely GOOD IDEAS. I also added that if his handwriting is really messy, Philip should consider typing his assignments before he hands them in!

This was the last of my school visits for the academic year, and i must say it was fun to end with such lively, engaged kids. Special thanks to their teachers -- I didn't write down all the names, sorry, but here's what I've got... Mrs. Georgina, Miss Pina, Madame Sophie, Madame Coursol, Miss D and Madame Christina -- special thanks to the students, and double thanks to the members of the Battle of the Books teams, and thanks also to Mrs. Scott, English language consultant at the LBPSB, for taking care of me all day and for getting me coffee-d up at lunch.

I wish all of you a great summer. Keep reading, keep writing, keep asking questions and keep your hearts open so that you can receive stories and also tell them. It was great being your prize!

More posts from author
Tuesday, 27 September 2022 The Moniques are Back!
Monday, 19 September 2022 Back in CEGEP -- with Gazette Columnist Allison Hanes
Tuesday, 31 May 2022 Good to have OPTIONS!