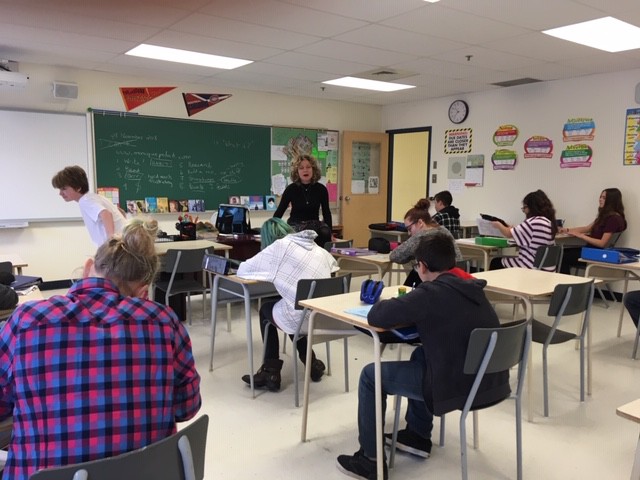 I'm just home from a fun visit to Joliette High School where I worked with Miss Beddia's Sec II classes. One of the things that made today's visit extra-fun is that Miss Beddia was once my student at Marianopolis College. There is a special pleasure in having taught someone who has become such a talented teacher.

I worked with two groups and I had to be super speedy with the first group (that's because bad weather here in Montreal made the trip to Joliette longer than I expected). But I'll give those kids credits because they managed to keep up with me!

I demonstrated how writers tend to be snoopy by asking a student named Sam why his thumb was wrapped in a bandage. You'll never guess what I found out! That Sam makes his own sushi. He was preparing sushi early this morning for his lunch when he cut his thumb (which explains the bandage). Later, when I was telling the students they should interview their grandparents in order to uncover their secrets, Sam told us a great story about his grandmother: "She accidentally lit a Costco on fire. Maybe it wasn't a Costco, but she said it looked like one." If I were you Sam, I'd bring a pen and paper over to your grandma's and get some more details. I think there's a book in there!

During the brief exercise I did with the first group, I asked students to write about a moment in their lives when they needed courage. Julianne wrote about coming to Quebec from Guatemala and attending a French school when she didn't speak a word of French: "I felt dumb (very dumb)." I love how Julianne included the words "very dumb" in brackets... you can really feel how unhappy and inadequate Julianne must have felt.

A student named William asked me, ""Why do you write books that won't be popular in ten years? Gaming is taking over." I told William that I hope to write books that will remain popjular long after ten years have gone by. And I told him that I have friends who write the scripts for video games... and maybe he should conisder a career in that field.

With the second group, I tried a different writing exercise. I asked the students to remember a fight they had been involved in, or else witnessed. Matis wrote about an ice fight, and recalled his "thoughts of future revenge." Matis, you should keep writing that story and tell us more about those vengeful thoughts. I'd like to know more about what went through your head during the ice fight. Alyssia wrote about a schoolyard fight. She remembered, "I could hear everyone cheering and taking a video." Ohh, I love the sounds of cheering, and I think it'd make a great scene in a story to have students filming a fight on their cellphones. Keep writing that story, Alyssia!

As I was telling the students today, memory is an important part of the writer's toolbox. Most students use their memory to prepare for tests. But I think memory can also be put to excellent use as a source of inspiration for stories. Add the magic "What if?" question that I talked about this morning, and you could be on your way to writing your first book!

Because I arrived late, the plan is for me to meet up again next week with some of Miss Beddia's students for a virtual writing lesson. Lucky me to have met all of you today -- and to have had Miss Beddia for a student. And lucky all of you to have Miss Beddia for your teacher. Now get to work on your stories!!