Another Amazing Day at Centennial Academy 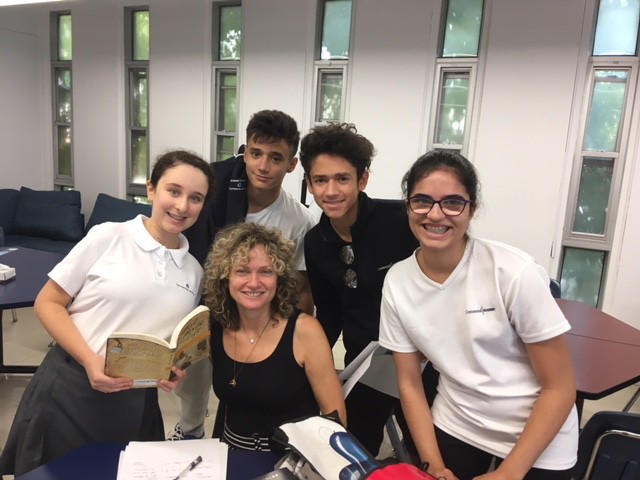 One of the challenges of being a writer is finding the words to express feelings that are deep and important. That's how I feel as I start today's blog entry.

I'm just home from my second of two visits to Centennial Academy. I worked with the Grades Nine, Ten and Eleven classes, and though I had to shush a few students, I think even those students came around... and ended up learning a thing or two from a certain curly-haired writer.

I know I learned from the students I worked with. I'll start with what I learned about what it's like to be a student who doesn't enjoy reading. One of the grade tens, Nicholas asked me, "What happens if you totally hate reading?" Then he added, "I have a feeling a lot of people agree to this." Wow, that was a big moment for me. You see, I'm so into reading (and writing), that I can hardly imagine what it feels like not to love those things. So I told Nicholas that he needs to find the RIGHT BOOK for him, and that if he can't find it, TO WRITE IT!!! (I told the students how I once interviewed Sophie Kinsella, author of the wildly successful Shopaholic series, and she told me she came up with the idea for those books because, "I wrote what I wanted to read."

Another student in the same class, Kiara, asked, "What if you don't like to read because you don't understand what you're reading?" I had an answer for Kiara too. I told her she needs to read with a dictonary nearby, and that she need to tell herself she can do it! I also explained that since last year, I've been reading four books every month IN FRENCH for an ICI-Rad Can show called, Plus on est de fous, plus on lit! When I started, I wasn't sure I could do it. But I'm doing it, and my French has improved a lot. Kiara, you can do it too!

Other cool moments from today's visit:

I was talking about the five senses, and a Grade Eleven student named Jake pointed out that we have more than five senses. For exampe, he mentioned our sense of BALANCE, and the way we are able to perceive HEAT. Super interesting, Jake! WRITE ABOUT IT!

Another Grade Eleven student named Dario might want to become a reporter. He told me, "I can make people feel comfortable talking to me." You're right, Dario, that skill will come in handy when you do interviews.

When I explained that my favourite question is WHAT IF? a Grade Nine student named Zachary told me, "I make cartoons for fun and I ask, 'What if?'" COOL!!

And during a writing exercise, a Grade Nine student named Nina, wrote about a childhood dream in which, "I was trapped in a room with a gorilla." For the second part of the exercise, I asked students to write a new ending to their dream. This is what Nina came up with: "I would say to the gorilla, 'I'm not tasty. Please don't eat me. Let's be friends.'" I WANT TO READ MORE OF THAT STORY, NINA!

My heart and head feel full after today's visit. The Centennial students gave me a lot to think about, and a lot of good feelings. Thanks to Miss Byron for the invite. And don't forget -- find the book you need to read, or else go ahead and write it! Love from Monique

Tweet
Why You Should Read Unity Club!
First and Super Happy School Visit of the Year: Ce...