Back at Westwood Junior High School 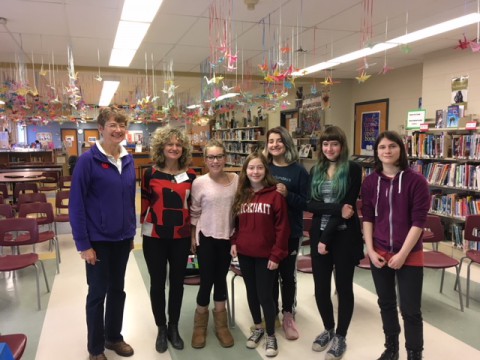 I was back in St-Lazare this morning (not quite as early as on Tuesday though), where I worked with more Grade Eight students. That's me in today's pic with librarian Mrs. Wilkinson and a few of the students I met.

I took LOTS of notes today (three pages full of interesting details and funny moments) ... so it's a little hard to pick just a few for today's blog entry. But since SELECTION OF DETAILS is one of the writing elements I told the kids about, I better do some selecting right here!

A funny moment -- When I asked a student named Aisling how she got such a cool name, and she answered, "I got it for my birthday!" Good one, Aisling. Don't you like someone who can come up with a joke so quickly? (Now I wish I'd asked Aisling if she ever cracked that joke before.)

An interesting detail (the kind that are fun to include in books) -- Look carefully at the feet of the students in today's pic. You may notice that one of them (her name is Keionna and she's standing the furthest back of all of us) is wearing TWO DIFFERENT COLOURED SNEAKERS. One's pink; one's blue. I inquired and learned that her parents bought her two pairs of sneakers so she could go for the extra-colourful effect.

My favourite question of the day -- Came from a student named Francesca. She wanted to know, "How do you avoid focusing on just one character?" I told her I don't. I always try to focus on one character -- my narrator (since most of my books are written in the first person). But, as I explained to Francesca, I work as hard as I can to make my secondary characters as alive as possible. Sometimes, I even make lists of questions about them: what do they want most in the world? what are they most afraid of? what's in their front pocket?

Another funny moment -- can't resist mentioning this one too. I was giving the kids a little life advice (hey, when you're 57 you can do that too!), so I said, "Don't drive your parents too crazy." At which point a student named Tamara called out, "Too late on that one!" That's just the kind of funny thing I'd want one of my characters to say in a book. Thanks, Tamara, hope you don't mind me stealing your joke.

I had lunch in Mrs. Quinn's classroom with Mrs. Quinn and a few students who wanted a little extra time to talk books. My favourite moment at lunch came when a student named Olivia S observed about her friend Ashyln that "she smells like lettuce." I actually got up to take a sniff! Ashlyn says she loves lettuce: "I eat it like chips." Don't you think that would be another fun trait to give to a character?

I also worked with Miss Chard and Miss Roy's classes. I finished the day in Miss Roy's room, and my very last conversation was with a student named Eva, who told me, "I have my own story, but I can't write it because I'm not a very good writer." I told Eva I'd give her my answer to that comment here on the blog.

Eva, it's your story and you should be the one to write it. Quit saying you're not a very good writer. What you mean to say is that your first draft will be awful -- just like every author's first draft. Get going! I hope to read it one day!

I guess you can tell I had a fun day at Westwood Junior. Thanks to Mrs. Wilkinson for the invite (and for the box of chocolate cookies that she somehow managed to sneak into an observant lady's bag without the observant lady even noticing!), and to the teachers for sharing their lovely kids, and to the kids... well... for being who you are. You make me glad to do the work I do!

Tweet
Keeping Things Lively on a Friday Afternoon -- Lin...
Worth Getting Up Early for Today's Visit to Westwo...