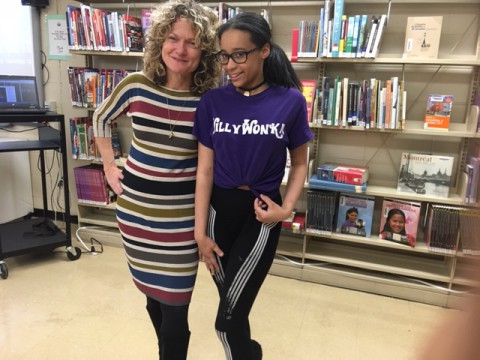 Let's just say it isn't the easiest task in the world to get two Grade Eight classes writing on a Friday afternoon. But I think I did it (well kind of anyhow!).

I was back at Lindsay Place High School this afternoon -- first to meet some young writers at lunch time, and then to work with two of Miss Daigle's classes. I had already met them on Monday, so today we were able to focus mostly on writing exercises.

First, a word about today's pic. That's me with a student whom I met at lunch. Her name is Kayla, and she's in Grade Nine, so I didn't get to work with her. But she did tell me she's into writing, and that she's working on a fantasy novel about a girl who receives a mysterious rose from her grandfather. I asked Kayla to be in the pic because I loved her T-shirt. Which children's writer wouldn't?!

So I tried a variety of exercises with the afternoon groups. I had the first group explore a memory using their five senses. We also reviewed the concept of foils -- and how using characters who are unlike each other can help advance plot, and keep readers interested.

I'd say the highlight of the afternoon was when we did an exercise I like to do with my own creative writing students. I asked for a volunteer -- someone who felt he really knew the character he was writing about for an upcoming assignment. A student named Mackenzie volunteered. Then the rest of us took turns asking Mackenzie questions about his character: Joseph Salvador. A student named Anthony asked, "Has your character ever been arrested -- and if so, for what?" Great question, Anthony. I also loved Miss Daigle's question, "What does your character dream about?" As I told the students, the more they know about their characters, the more interesting their stories will be.

This was a busy week for me with four school visits. One of my friends asked whether I was exhausted, but I told her that in fact, I feel energized from being around so many fun, smart kids this week. (Even if I had to give the Friday afternoon groups a bit of a push to keep them working!)

Thanks again to Miss Daigle, and to librarian MIss Dunning, for having me at LIndsay Place this fall. Thanks to the kids for working hard. Good luck with your story assignment. (Don't forget to REWRITE a lot before you hand it in to Miss Daigle!) Hope to see you in the fall when I come back to celebrate the release of Jelly in a Jam, a story which I dreamed up in part at your school!