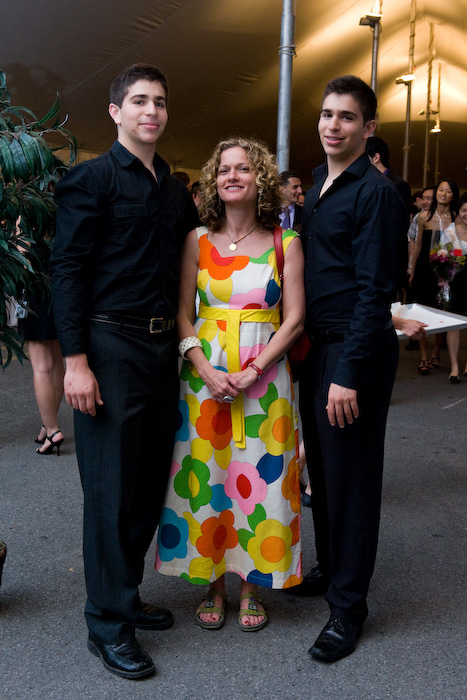 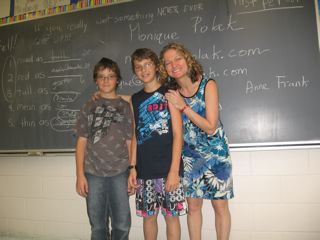 This seems to be my week for hanging out with twins! In today's pics, you'll meet two pairs offraternal twins. The pair at the bottom who are in Grade Six at Ecole de l'Envolée in Blainville, Quebec, where I did an author visit today.

These students are part of a special three-month English immersion program at the school and teacher Normand Bélair came up with the idea of introducing the students to an author who writes in English -- me!

This was my first time working with English immersion classes -- and it was fun. Even though it's close to the end of the year and other kids were out in the schoolyard playing ball, I had a surprisingly attentive audience. Several came up with great similes (a simile, in case you've forgotten or never known it, is a comparison using "like" or "as"). I pointed out that when most of us hear the words "round as..." we automatically think of the word "ball." So I challenged the students to come up with more original comparisons. Alyson said "round as a bubble"; Tommy Lee said "round as a cookie"; and Olivier came up with my favourite -- a very Canadian answer -- "round as a hockey puck"!!

Now back to the subject of twins. I have a great story for you today: Last night was Marianopolis graduation. When one of my students came onto the stage (let's call him Daniel D), I was kind of shocked to realize it wasn't him! It was his twin brother (let's call him Ari D). Though the two young men are not identical, they look pretty darn identical to me (check out the first picture in today's blog entry to see for yourself)!! Well, at the reception afterwards, the person I'm calling Daniel D confessed that he occasionally was too sleepy to attend my 8:15 A.M. class last semester -- and so? Can you guess the end of this story?

HE SENT HIS BROTHER!! Well, the brother (whom I've been calling Ari D), told me he enjoyed my class, too! Now, what if I told you that Daniel D was once too tired to write his test and so he got Ari D to write it instead... and what if I told you Ari D got a miserable mark on that test... and the teacher thought to herself, "This student did so badly it's hard to believe he was even in my class!!"? Would you believe that story? Or would you think, no way, it's that fiction writer making things up again!!

Now, wouldn't this make an amazing story -- two twins (let's make them identical) who occasionally impersonate each other!? What do you think? Hey you twins out there, you'd better start taking notes!

Meet Louis Sachar! (I Did!!)
Report from Hebrew Academy

hahahaha!
I actually knew about that but forgot until I read it here...

0 Cancel Reply
hahahaha! I actually knew about that but forgot until I read it here... :D
Cancel Update Comment

Hope you and your family are doing well. I have enjoyed reading your blog.

0 Cancel Reply
Hope you and your family are doing well. I have enjoyed reading your blog.
Cancel Update Comment