Oh, what a wonderful afternoon!! That's Louis Sachar with me in today's pic. Louis is the author of many YA books including Holes, which was made into a movie by Disney. I LOVED THATBOOK!! My friend and co-author, J.R. Scharf, read together with Louis today at an event organized by Summer Literary Seminars. Louis read from the first few chapters of his new book, The Cardturner. Once again, he's created an irresistible narrator with a deadpan sense of humour -- and I get a strong feeling that teenage boy with the deadpan sense of humour is alive and well inside his creator!

As the book's title hints, The Cardturner has something to do with cards, in particular the game of bridge. Knowing Louis loves playing bridge, his editor suggested Louis write a YA book with bridge in it. "I thought it might be fun if I could pull it off," Louis told us.

Though Louis always knew he wanted to write, the turning point came when he was studying at University of California at Berkeley and he happened to pick up a brochure about doing volunteer work as a teacher's aide. Teachers' aides got course credits and so Louis signed on, thinking it would be more fun than writing tests and essays. His experience as the "yard teacher" inspired his first book, Sideways Stories From Wayside School: "I based the stories on kids I knew at school."

As for Holes, Louis said the idea of telling a story set at a juvenile detention camp came before he thought up his narrator, Stanley Yelnats: "At first, I had no idea who the characters were going to be. I write a little every day and the story starts to grow."

Louis is often asked whether it was easier for him to write for young people after he became a father. Here's his answer: "It was harder for me to write children's books after I had a child. I was just remembering back to how I saw the world."

See -- that's the trick -- re-inhabiting who we were when we were teens. And those of you, dear blog readers, who are still young, take advantage and write it all down... while the memories and experiences are fresh!

Anyway, I'm back at my computer, all fired up thanks to a great afternoon in such illustrious company. And watch this blog: Louis will be in Montreal for another few days and I'm hoping to catch up with him again. Of course, if I do, expect to read about it right here!! 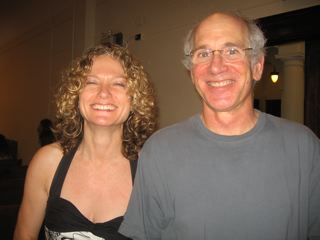