Today I met with teacher Carole Blouin and her sixth grade class at Ecole Paul-Bruchesi here in Montreal. Before I met them, the class, working together with their French teacher, wrote a 150-word introduction (in French) to a story.

In the mean time, a class at Tom Thomson School in Burlington, Ontario, were busy writing their own 150-word start (in English) to another story.

My job is to help Mrs. Blouin's class continue the story begun by the students at Tom Thomson. So far, our story involves an absent-minded scientist, his frustrated assistant Carl, and a caffeinated squirrel!

In all, I'll meet with the students five times. On the fifth session, Montreal illustrator Philippe Béha takes over the project. He's going to help the class illustrate the story I'll have helped them write.

If you think this sounds like fun, you're right!

I'll see the class again on Friday. We tossed around some ideas today (I explained that that was like tossing around a volleyball). Now we're going to let the ideas cook (I explained that this is what cooks do -- decide what kind of recipe they want to try, then gather ingredients, then stir and adjust the flavours). On Friday, we'll do more tossing and cooking and then, if that goes well, we'll begin the actual writing work.

If you're wondering about today's pic -- it's a shot of something unusual I spotted in Mrs. Blouin's classroom. After 27 years of teaching, there aren't too many things I see in classrooms that still surprise me. This is what a student named Vincent did with his eraser. Vincent, if you're reading this, I know you really were paying attention to what I was telling you guys about how stories work. A vendredi, mes nouveaux amis! 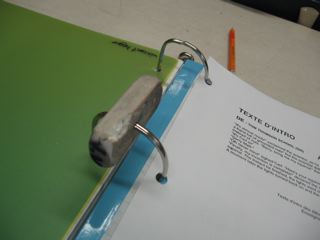 (which means "See you Friday my new friends!")