If you've been following my blog for a while, you'll know I have an especially soft soft-spot for a Blue Metropolis Literary Foundation project called Quebec Roots. I've been involved in the project for more than ten years. It brings together English-speaking students from across our province with a writer and photographer. Which explains what I was doing this morning at McCaig Elementary School with artist-photographer Thomas Kneubuhler and Ms. Fraser's wonderful Grade Five class. (It also explains why I look so happy in this photo, taken with a student named Christopher.) 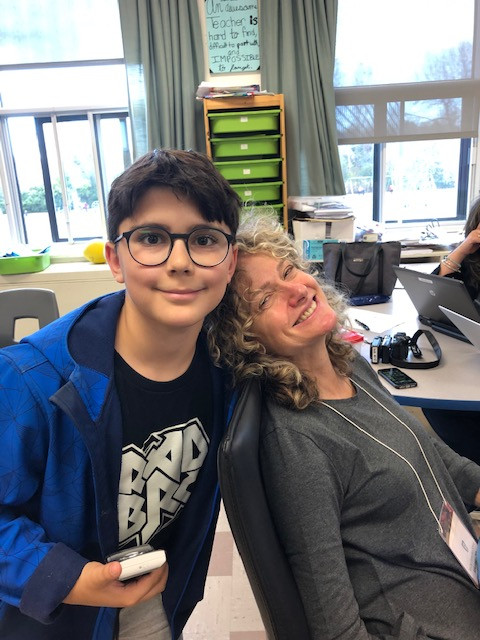 I gave a mini-writing workshop and Thomas gave a mini-photography workshop, but mostly our task was to help the students come up with a topic for their chapter, which will be published in a real-live book this spring. Thomas and I will help the kids use photos and words to tell a story about their community.

The kids came up with several good topics, but thanks to democracy, they decided on SECRET PLACES. I like this topic a lot because it combines two of my favourite things: secrets and places! We did some brainstorming, some writing, and we also went out for a walk during which the students took some great pictures.

I liked when Thomas told the class, "You have to play." He meant that you have to move around when you take photos -- see what the shot looks like when you are on the ground, or stretched out on a table. I think writers need to play too -- and also work hard! I asked a student named Laurence what she learned about writing, and she told me: "I learned it takes more than one day to write!" That's definitely true for me, Laurence!

A student named Krystal learned something similar about photography. As Krystal put it, "You have to take more than one photo. The first one isn't always perfect."

I liked how Ms. Fraser gave the students this advice when they were taking photos: "Think about telling a story." YES YES and YES! (Did you hear me say YES?!)

We wrote a group poem about the class gecko whose name is Ronnie. It turns out he has a secret place too -- under the paper towel he is supposed to poop on!

I guess it was a day for poop jokes because Dante made us all laugh with the story of his little cousin, who, at a family dinner, made such a big poop that "it exploded and got on her shirt." Uh oh!

A student whom I'll call K described her secret place as "a lot more Zen." (I think K should write a poem and call it "A Lot More Zen.") And Laurence, whom I mentioned before, said, "I like being alone and quiet." Laurence, you can use that line in your writing too.

So I'd say the 2019-2020 edition of Quebec Roots is off to a great start. Thanks to Blue Met for making the project happen, thanks to Thomas for being a super partner, and thanks to Ms. Fraser and your class for being FUN and SMART. (My favourite combination!)

The Moniques Are Back in Action!
Recycling Kids at Joliette High School

What an amazing day we had! You and Thomas were so inspiring. Thank you so much! I can't wait to see all that the students create, produce and PUBLISH!!!

0 Cancel Reply
What an amazing day we had! You and Thomas were so inspiring. Thank you so much! I can't wait to see all that the students create, produce and PUBLISH!!!
Cancel Update Comment

WE can't wait to see what the students do! And honestly, we got inspired. Thanks, Ms. Fraser, for sharing your kids with us today!

0 Cancel Reply
WE can't wait to see what the students do! And honestly, we got inspired. Thanks, Ms. Fraser, for sharing your kids with us today!
Cancel Update Comment
First Page Previous Page 1 Next Page Last Page