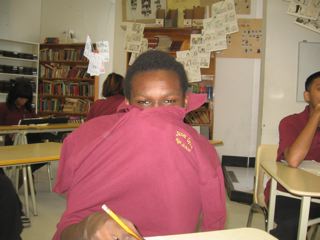 Talk about body language! Have a look at today's pic -- that's Cedric, a student at James Lyng High School here in Montreal, who was hiding under his T-shirt during the first part of my visit today. (But I noticed that once I got to talking about writing, and especially about my book What World Is Left, Cedric emerged from under his T-shirt! Besides, he had an excuse -- he told me he was cold.)

Anyway, I'm always telling students how I feel the air is"thick with stories." Well, it certainly is at James Lyng. I worked with three groups of students, all of whom are taught by Mrs. Bourne. One student told me that Mrs. Bourne is "like a second mother to us."

So here's a few bits and pieces from my day: A student named Derrick responded to an exercise I gave about retrieving a memory by writing a short paragraph about coming up empty. I suggested he might turn it into a poem -- I had the strong feeling that Derrick has a poetic soul -- and you know what? He wrote something lovely, and very moving.

I told the students that like working out, writing requires constant practice. Then a student named Amber explained how she plays football with her brothers every single day. I thought that was a great example, and I imagine Amber plays a pretty good game of football! Amber, keep working on the writing, too. Slowly, you need to build your skills and endurance -- just like with football!

Matthew wrote a fine descriptive paragraph set during World War II. Lahteisha understood immediately when I said my stories start with a little bit of something true -- I knew it from her eyes and also because she said, "then you expand on it." Which is exactly what I do: start with something true, then let it expand in my mind by asking myself the question, "What if?"

And Ashley Tibbo, what can I say? Your writing showed me that you are a writer. Not to mention that you have a perfect writing name. I can already imagine it on a book cover!

Have a great weekend all of you. This was a special week for me -- in which I got to meet many special inspiring young people at Beurling and at James Lyng. Get started on the stories that matter most to you!

Thanks for the compliment about my "poetic soul" I decided to title the poem The Black Hole : nothing. no picture, no feeling. just a black hole. nothingness. no smell, no sound. no senses at all. as if, there is no life or existence.

0 Cancel Reply
Thanks for the compliment about my "poetic soul" I decided to title the poem The Black Hole : nothing. no picture, no feeling. just a black hole. nothingness. no smell, no sound. no senses at all. as if, there is no life or existence.
Cancel Update Comment
1