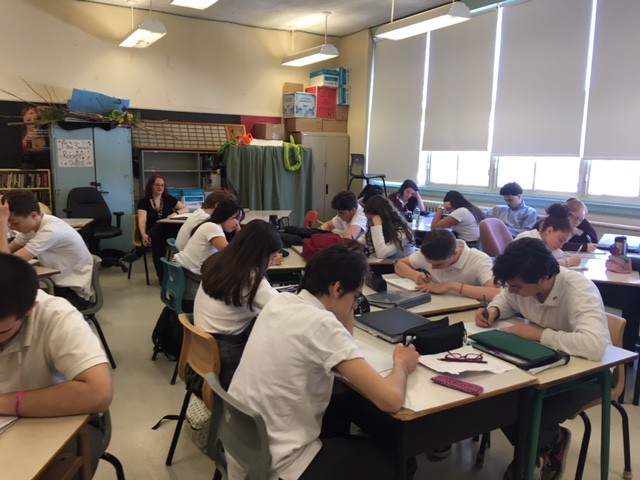 I'm just home from a happy start to my week with two of Miss Bennett's English classes at Royal Vale School. You know what makes a writer (especially one who is also a teacher) happy? SEEING KIDS WRITE!! (Which explains the pic I took for today's blog post.)

Because this was my second of two visits with the students, today I focused on writing exercises (though if you know me, you won't be surprised that I also told a couple of stories!!).

For the exercises, I tried to give the students a mix of play and work -- since for me, writing is always a mix of those two elements. Mostly though, it's hard work -- but I find I need to add some play as I go along. I showed the students how writing even a simple list of words can be playful and remind us of the pleasure words can bring.

The big exercise, which I did with both groups, involved reconnecting with a memory from when the students were ten years old. As I explained to the classes, I don't think memories are as random as most people think. I believe that our memories are stories asking to be told!

I asked the students' permission to share a little of what some of them came up with. A student named Christopher remembered "the lunch line outside." What I liked about that is the unusual setting. I've read lots of stories about kids in classrooms, or even in the schoolyard, but never one about kids in a lunchline! I also noticed that a student named Rachel is good at description and creating atmosphere. She wrote: "I love the dark, but not the loneliness of the night." Nice!!

I also reminded the students to try and find out older people's best stories (and their secrets)! When I told this to the second group, I heard a student named Adriana say to herself, "I know my grandmother's." After class, I asked Adriana about her grandmother's story -- Adriana explained that when her grandmother was growing up in Italy, she knew a family that pretended to be poor in order to sell more of their products at the local market. Adriana, you should turn that into a story! You could try telling it from your grandmother's point of view!

Can you tell that Miss Bennett's classes inspired me? Because they did -- and that's a good thing since this author/teacher has the rest of the day to work on her own writing. Thanks to the students at Royal Vale for doing such a great job on today's writing exercises, thanks to Miss Bennett for hosting me, and thanks to the NDG Community Council, especially Sharon Sweeney, for making the visits possible. Let's all make this a great writing (and reading!!) week!!

Tweet
Kicking Off This Year's Blue Met Kids' Festival at...
First of Two Visits to Royal Vale School -- I'd Ca...

Thank you so much for the wonderful visits! You’ve helped us dig deeper to find ideas for stories and helped us appreciate the tiny details in life; like body language and setting. This was such a memorable experience and I can’t wait to read your books

0 Cancel Reply
Thank you so much for the wonderful visits! You’ve helped us dig deeper to find ideas for stories and helped us appreciate the tiny details in life; like body language and setting. This was such a memorable experience and I can’t wait to read your books
Cancel Update Comment