YOUR STORY: Happy Day in Ottawa with MASC 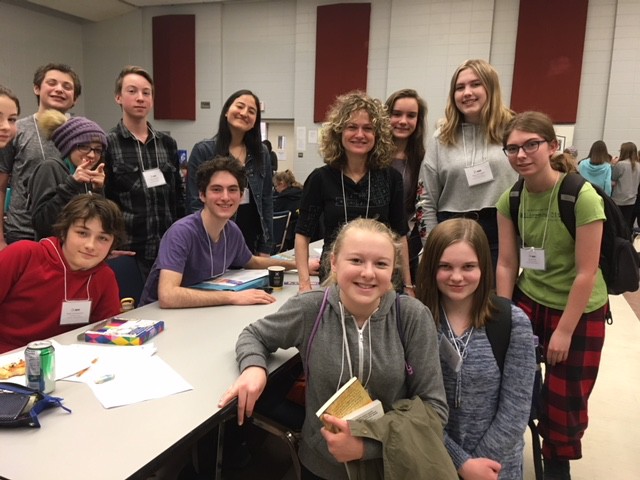 My day in Ottawa started with a skate on the Rideau Canal. Okay, I took two little spills (it's been a few years since my last skate and the surface was a wee bit bumpy), but I got right up, and ... watched the sun rise. I didn't think my day could get much better than that. But it did.

That's because I was presenting at YOUR STORY: Write it, Draw it, Tell It. A MASC Teen Authors & Illustrators Festival program, it took place at Cionfederation Education Centre. I got to rub shoulders with some terrific writers and illustrators -- Alan Cumyn, Max Turner, Melanie Florence, Caroline Pignat, and Brian McLachlan -- but even better, I spent most of my day working with 14 amazing young writers (that's them with me in the pic).

Usually, when I do a day-long writing workshop, I spend half the day on writing tips and telling stories. But you know what? I swear I could feel that what these kids really (excuse the adverb, I decided I needed it in this sentence) wanted to do was WRITE. So I hurried through my tips (make writing a habit; read read read; take notes all the time; add trouble to your story; rewrite, rewrite, rewrite), and focused on writing activities. And my hunch was right because when I took a peek at what the kids were producing, I was seriously (another adverb, also required) impressed.

The students were from Grades 8 to 12. I teach college here in Montreal, and the MASC kids were as strong, and perhaps even stronger than many of the students I teach. Also, to be honest, not all of my students are keen on writing. The students who signed up for the MASC festival know that they want to make writing a big part of their lives. Every single one has talent, but I told them something my grandfather (who was a successful painter) once told me: "Talent is only a small part of success. What you need more than talent is the ability to work hard."

I thought I'd share some of my favourite lines (and subjects) that the students came up with.

When I asked the students to write about a memory (if you're a regular reader of this blog, you know that I think memories are stories asking to be told), a student named Wolfe recalled wandering away from his friends when they were at the soccer pitch. That's when he met another kid who was also by himself. Listen to Wolfe's dialogue: "'You alone too?' he asked. "'Ya. How did you end up alone?'" Simple, direct, this snippet of dialogue takes us right into Wolfe's memory -- and makes us want to know more about the boys and their conversation.

Later, when I asked the students to write about a moment of change in their lives, Kieran started her piece with the line, "Silence is the sound that I fear most." I LOVE IT. Also, it would make a great book title. Even typing in that line now I get goosebumps -- which for me is a sign that I am reading or hearing something beautiful. A student named Anna wrote about getting lost in an old age home. Oh, Anna, that's such a good topic for a story. You're gonna write it, aren't you? Ksenia wrote about torturing her fifth grade math teacher -- another amazing topic for a story.

My only complaint about the day was that IT WENT TOO QUICKLY. As I told Wendy Hartley, MASC's English program director, these students didn't really (another adverb alert!) need me, they already have a ton of talent. But maybe I gave them a bit of extra inspiration and some tips they will be able to use as they continue to develop as writers.

Many thanks to all my friends at MASC -- special shout-outs to Bonnie and Maurie for ferrying me from and to the train station, to Faith Seltzer for brigning me to MASC in the first place, to the authors and illustrators for your great presentations (watch this blog for more on that). But most of all, thanks to the students. WRITE ON!

Tweet
The Moniques are Back!
Writing Workshop to Mark International Day for the...