Another Sweet Day at Centennial Academy

I was back at Centennial Academy today -- doing writing workshops with four groups of students, many of whom I had met before... so I tried to shake things up and test out some new writing exercises! 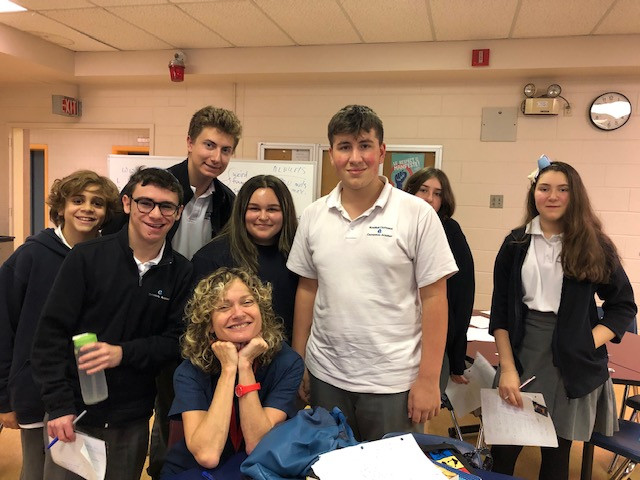 It isn't right to have favourites... but I must say I have a few at Centennial. One is Massimo, who told us a fascinating story about how his great-great-grandfather who worked doing construction in Italy was poisoned during wartime. Massimo included some excellent DETAILS, such as that his great-great-grandfather was "so so thirsty," which led him to drink water that had posion in it. I suggested Massimo turn this tragic story into a piece of writing. And because Massimo has a great imagination, he came up with the idea of adding a time travel element. He was thinking of including himself in the story! I was telling the students how I love asking myself WHAT IF? when I am inventing stories, and Massimo commented, "There's 'what if's' everywhere to me!" Way to go, Massimo!

A student named Ethan stole my heart with his sense of humour. After a writing exercise, I asked the students at his table, "Did you guys produce anything?" -- to which Ethan replied, "I may produce a sneeze in a minute!" You know what, Ethan? I'm going to STEAL that line and put it in one of my books! (We writers love to steal!!)

Later, when the students wanted to know whether their teacher Ms. McNaughton was married, and she didn't reveal her marital status, a student named Michael called out, "You'd have to ask her husband if he's married!" Good one, Michael!

A student named Nikolas remembered that last year, I suggested the students find someone old to interview -- because older people have the most stories. Nikolas also made me laugh when he said he tried to interview his grandmother, but she told him, "I'm not old!"

I had a very special lunch period in the lounge, chatting with students who were eating their lunches. Renee and I discussed the self-doubt that comes with being a writer and facing the blank page; Massimo told me that, "Even if you are 59 going on 60, I hope you do not retire from making books"; and a computer wizard named Will helped me out when I told him that the main character in the book I am writing needs to find a way to outsmart a security camera system. Thanks, Will!

Thanks to all the kids for being super wonderful. That includes you Bouchard (I'm stealing your name for a future book too), and to your teachers Ms. Granitto, Mr. Pepin, Ms. Marquise, Mme. Ferland, Ms. Traynor and Ms. McNaughton for sharing your kids with me today. Another thanks to Ms. McNaughton for arranging my visit. I'll miss all of you! In the mean time, keep writing, keep reading, keep being kind and funny!

Tweet
The Taste of Rain Goes to Girl Guide Camp!
Full Heart After My Morning at Centennial Academy