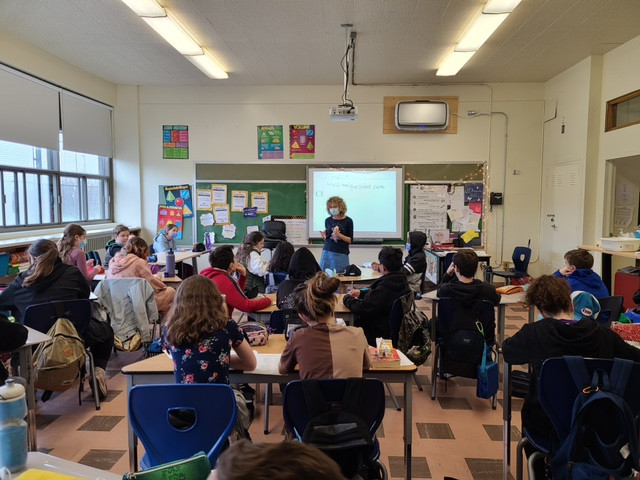 I was back in action today for the TD-Blue Metropolis Children's Literary Festival. I love today's pic -- not just because it's a nice pic with a lot going on, but because it was taken by a vice-principal -- Ms. Doughan! It's not every day a vice-principal pops in during an author visit, nor is it common for a vice-principal to take photos! Three cheers for Ms. Doughan, and for Ms. Hindler, the teacher whose Grade Six class I visited at Willingdon Senior Campus this morning. But the three biggest cheers of all go to the students. I had told them I planned to teach them six writing tips -- but we got up to nine, with four extras on the side of the whiteboard!

We talked about how stories about people with perfect lives don't make good stories. "A perfect life is boring," a student named Lydia remarked.

I want to tell you more about some of the kids before I talk about the writing work they did during today's workshop. A student named Che told me, "I'm named for Che Guevara" which is pretty cool if you ask me. If you didn't hear of Che Guevera, he was an important figure in the Cuban Revolution. Che's comment got us talking about activism, and it turns out these students are activists. They are collecting school supplies for Ukrainian kids, as well as making a legacy gift to an organization that supports the homeless. When I asked for the name of the organization, a student named Emma spelled it for me: "Le Grand Pas." And a student named Mila popped up from her chair and went to get me a handout with all the information about the project. All that led me to tell the kids that stories need to include inmportant details. If I just told you the kids were activists, that would be less interesting that learning how Emma spelled the name of the group, and Mila brought me the handout. Details help bring our stories to life.

Now for the writing exercise: I had the students write about a memory from when they were ten years old. I warned them that the memory could be difficult, but that writing requires courage. A student named Emile wrote about the time "when my Grampa and my uncle died." But that's where Emile's story ended. I told him that for me, I often stop writing just when things get difficult (and interesting)... but that I've learned to push a little harder, and write some more. I compared it to squeezing toothpaste out of a toothpaste tube.... With writing, the stuff that comes out when you push is often the best material of all.

Olivia wrote about her tenth birthday: "because of COVID, I made individual cupcakes and delivered them to my friends' houses.... I was sad because I couldn't see my friends in person." Nice work, Olivia! We learn a lot about Olivia from this story -- for instance that she cares about her friends, and that she knows what sadness feels like. Writers need to be brave and include feelings in their stories. Like details. feelings also help bring stories alive!

When I was just about to leave, Lydia wanted to know, "Could we add something fake?" Well, thanks Lydia for my favourite question of the day! Yes yes yes (and yes some more)... definitely add something "fake." That's how writing works. At least for me. When I write fiction, I often start with a true feeling, or an incident that really happened, then I ask myself WHAT IF? What if this happened? Or that happened? And that's pretty much how I make my books. Oh yeah, as I told the kids, I also do a TON OF REWRITING. The first draft is always awful. In fact, my first ten drafts are usually always awful. But the more I rewrite, the better my writing gets!

Thanks to Blue Met for sending me to Willingdon Senior Campus. I'm trying to find the right word to describe my morning with Ms. Hindler and her class. AWESOME. Yup AWESOME is the right word!

Thank you for all of your tips and tricks about writing!
You were awesome today, I love your stories and how you told them.
Have a good day!

0 Cancel Reply
Thank you for all of your tips and tricks about writing! You were awesome today, I love your stories and how you told them. Have a good day! Also I recommend the book" In the crook of a frangipani tree" by Pat Hardt :):):) -Mila
Cancel Update Comment

Great to meet you today, Mila! And exciting that your grandmother Pat Hardt is also an author. I will try to find her book!

0 Cancel Reply
Great to meet you today, Mila! And exciting that your grandmother Pat Hardt is also an author. I will try to find her book!
Cancel Update Comment

Thank you for coming to our classroom yesterday, I really enjoyed the tips that you gave us and your overall energy with the students.
- Olivia Drolet

0 Cancel Reply
Thank you for coming to our classroom yesterday, I really enjoyed the tips that you gave us and your overall energy with the students. - Olivia Drolet
Cancel Update Comment
First Page Previous Page 1 Next Page Last Page