You will wonder what the students are doing in today's pic. Taking a nap? Meditating? 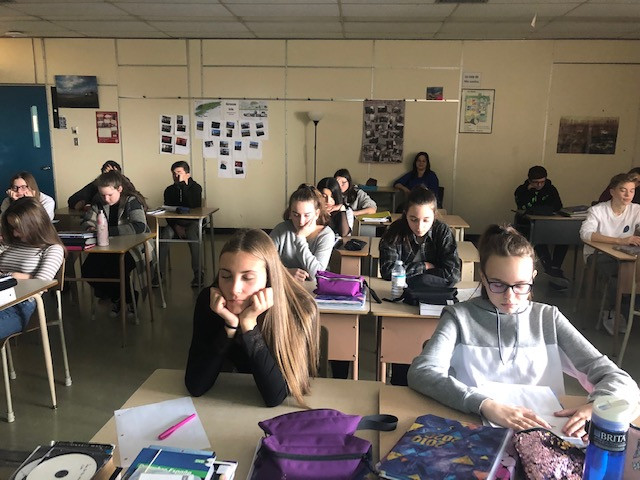 That's because, as I explained to the students at Ecole Secondaire de la Seigneurie today, all writing begins in our heads.

I'm in Quebec City for two days of writing workshops. I've been to Ecole Secondaire de la Seigneurie many times before. You'd figure I'd know my way around by now, but I don't! Today, I worked with Mr. Lord's and Miss Alexandra's Sec III students. Most are French-speaking, but their English is excellent. And I was not supposed to speak a word of French with them, though I slipped up a couple of times!

I thought I'd begin today's report with something funny. Mr. Lord introduced me to Miss Alexandra, then before he went to his own class, he warned me, "Don't French!" I know he meant "Don't speak French!" but the verb "to french" also refers to serious kissing. No problem, Mr. Lord, I'll save my serous kissing for a more appropriate occasion!!

One of the things I love about school visits is meeting "characters" -- I mean students of course, but the truth is they inspire me when I create my own characters! Let me tell you about a few ccxharacters I met today.

There was William, who admitted he wasn't too interested in learning about writing. I asked him, "What do you like?" and he answered "Nothing." I told William that he helped me come up with a great book title, I Like Nothing. What do you think? Look, William, I'm pretty busy writing books right now. How about you get started on that book? After all, it's your title.

A student named Lea caught my eye because of her striking black hair. I also liked how she was dressed: she was wearing a T-shirt over a long-sleeved maroon top. I think I am going to let one of the characters in the book I'm working on dress like Lea.

There's always a student who steals my heart. Today it was Anthony. I noticed little things about him, such as that he is prone to blushing and that he drums his fingers on his desk. Also he told me he enjoys writing -- which accounts in part for why I liked him so much!! At the end of my talk, Anthony commented that, "There's a million ways to write." True, Anthony. Now your task is to find your way, and maybe borrow a couple of my tricks if they prove useful to you.

With Mr. Lord's first group, I experimented with a new writing exercise. I asked the students to write a paragraph about someone they know who "has a story." Ariane wrote about her grandmother. I asked Ariane's permission to quote a line from her description. Here it is: "My grandmother is the only one who understands me." I LOVED THAT. Ariane, you need to learn your grandmother's story -- and make it yours.

My last class of the day was with Mr. Lord's other group. There, I worked with the memory exercise I often use during writing workshops. I asked the students to remember an event from when they were five years old. Though there wasn't much writing time, a student named Laurence came up with something lovely, which I think she should develop into a story. Laurence also let me quote her, so here goes: "He was my first frisnd who was a boy." Great topic, Laurence -- and well worth exploring -- first friendship between the sexes.

Okay pages, I'm writing to you today from a coffee shop in old Quebec. Time now to kick back, drink my coffee, and listen in on conversations -- it's another trick I have for finding inspiration.

Thanks to Mr. Lord for arranging today's visit, and to him and Miss Alexandra for sharing their students with me. And a special thanks to the students for getting my 2020 off to a happy start. Write and read -- then repeat as necessary!!

Today's Visit to Polyvalente Charlesbourg
It's A Wrap! The Mysterious Story of the Twins...