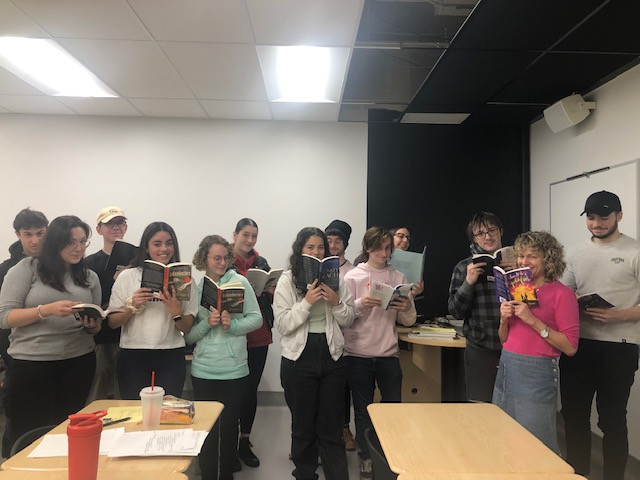 Today's #IReadCanadian Day and I celebrated it with students at Cégep de Saint-Jérôme. In today's pic, we are doing what Canadians are doing everywhere today -- reading from a Canadian kids' book!

I worked with two classes -- Ms. Dodwell's and later, Ms. Lavinia's. All the students were wonderful and attentive -- you guys made me miss being a CEGEP teacher!

I also did a writing "atélier" -- that was only for motivated students -- and there were quite a few of them.

Some highlights of my day -- a student named Angélique said she wants to research a fascinating, but disturbing family story. It turns out Angélique's grandmother was kidnapped when she was a young woman. That will be hard for your grandmother to talk about, Angélique, but I hope she will agree to do it.

A student named Roxana told me she really liked a line I quoted from writer Anais Nin who believed writers get to "live twice." As Roxana told me, "Maybe everyone gets a second life when we daydream." How beautiful!

I think however that the best part of my day was working with the atélier participants. They are working on stories for their teacher, Ms. Isatis. Vivianne is writing a wonderful piece about a schoolyard game. It turns out she was inspired, in part, by Shirley Jackson's short story, "The Lottery." I told Vivianne to get rid of adverbs, and I think we all liked her story more when she followed that suggestion. David and I worked a lot on his dialogue. I suggested he leave out anything boring -- that though a lot of real life dialogue is dull, in stories, dialogue needs to SING. And Oliver taught me a new word: JANKY. "It means," he explained, "something you find in a dumpster." All first drafts, I told the students, are JANKY. But when we rewrite, our work gets better and better.

Thanks to Ms. Dodwell for arranging today's visit. Thanks to the kids for being fantastique!

Quebec Roots Goes to Chapais
Repeat After Me: It is not right to have favourite...