Repeat After Me: It is not right to have favourites! Day 4 at Laval Senior Academy 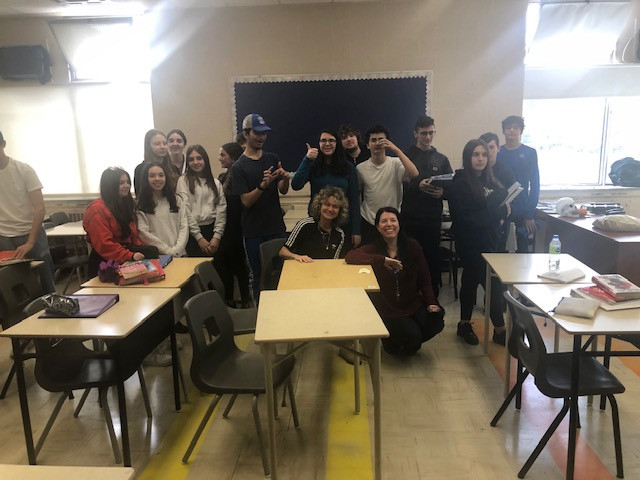 The title of today's blog entry is "Repeat after me: 'It is not right to have favourites!' Day 4 at Laval Senior Academy." And it's true, teachers -- and writers who go into schools -- should not have favourites. But hey, it sometimes happens. You can meet my favourites at LSA by checking out today's pic. Those are Ms. Lambropoulos's Grade 9 Enriched English students. I met with several classes several times, but I worked four times with this group (which may help explain, in part, why they became my favourites.) More on them a little later in this blog entry.

I started the day with Ms. Gosdanian's Grade 10's. Let's just say they are a little more BLASÉ than Ms. Lambropoulos's class. But I got some good work and interesting comments from these students too. A student named Ali wanted to know whether, for his memoir assignment, he could write about the feeling of anger. YES YES YES. Any strong emotional experiences make great material -- and I think anger is a feeling that perhaps does not get enough attention in stories. Go for it, Ali!

In second period, I shared some tips for interviewing seniors (I told the classes that older people have the best stories and that they are sometimes more willing to share them with teenagers than with their own children). A student named Peter told us about a man he described as, "an old Greek dude at my gym." I love that description, Peter! It turns out that Peter and the dude already chat -- in Greek -- at the gym. Peter, I hope you'll find a way to interview your dude!

I asked the students in Peter's class to write about a memory from when they were ten years old. Lorenzo wrote about being in Grade Five: "I moved houses and I had to change schools." That would be a lot of tumult for a ten-year-old and a subject worthy of a memoir assignment. Lorenzo also told us his mom was a teacher at his new school -- hey, that's a great twist to add to your story, Lorenzo!

Now... on to my favourites. Because it was my fourth time working with Ms. Lambropoulos's class, there was time for a real-live writing workshop -- which I haven't done since I worked with my own students at Marianopolis College last spring (just before I retired from CEGEP teaching). It felt great and the students did beautiful work. A student named Ash wrote about winning third place in a triathalon in Alberta when he was only ten. Ash wrote, "My run grew into a sprint" -- a lovely simple sentence that takes us to the triathalon with Ash. Olivia wrote something exquisite about her grandmother: "She would religiously buy perfume not for the scents, but for the bottles." As I told Olivia, though I never met her grandmother in real life, I feel as if I somehow did get to meet her. Thanks for that, Olivia!

So, that's it for my four days of writing workshops at Laval Senior Academy. Thanks to Ms. Gosdanian and Ms. Lambropoulos for the invite. Thanks to Ms. Song, Ms. Gosdanian's lovely student teacher. Thanks to the students -- I hope you'll be able to use some of my tips as you write your stories. Now get to work!