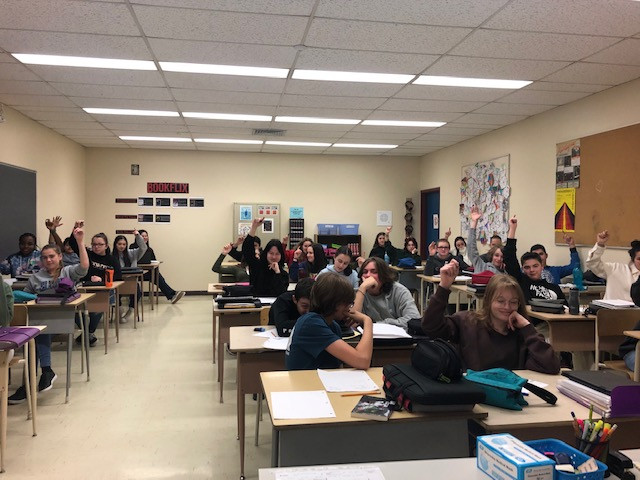 I’ve been visiting Ecole Secondaire de la Seigneurie in Beauport, Quebec, for at least ten years –maybe more! I always come in January, and I always have fun – in part because I’ve become friends with English teacher Mr. Lord and more recently, with English teacher Ms. Alexandra. But today was my happiest day EVER at Ecole Secondaire de la Seigneurie and it wasn’t because of my friends (though I do like them!), IT WAS BECAUSE OF THE STUDENTS WHO DID INCREDIBLE WORK. In fact, I came close to tears when I read some of the students’ writing today. And though you probably don’t know this about me, I seldom cry. Not because I wouldn’t like to, just because I don’t cry easily.

I spent the morning with Mr. Lord’s Sec. III English class. When I asked the students if they were in the mood for a writing exercise (I have found that students are rarely in the mood for a writing exercise), a student named Anne-Clara called out, “We love to write!” I had a feeling Anne-Clara was teasing; my hunch was confirmed when her seatmate Mahlia called out, “She’s joking!”

You probably do know I’m OBSESSED with body language. Well I noticed that a student named Matis had perfect body language – he was smiling, nodding intelligently and making eye contact. When he told me his name and spelled it out for me, I asked if he had ever seen the works of the famous French painter Henri Matisse – Matis hadn’t, so I felt lucky to be the one to tell this Matis about the other Matisse!

When I was talking about how asking “what if?” can help move a story forward, a student named Marion asked, “Isn’t that kind of like overthinking?” I thought this was a brilliant insight. I think you’re right Marion, and if anyone out there is an overthinker, maybe you should consider a career in fiction writing!

Marion and a student named Amy stayed for a few minutes after class. It turns out they both want to be writers, and I suggested they form an informal writing group and share their work. Amy told me she is considering becoming a mortician! How interesting is that?!

I tried a new writing exercise this morning – I asked students to write about a moment that had shocked them. Amy wrote an astonishing piece about someone she loves – and she said I could quote my favourite line for you here: “Every Friday night she became everything she hated about her own mother.” All I can to say to that is WHOAH and also WOW! Amy, that is such powerful writing and it has so much insight. And you’re only in Sec. III – if you keep writing, and I think you should, I can hardly imagine how accomplished you’ll be when you’re 62!! NOW GO FOR IT!!

After lunch with Mr. Lord at our favourite Mexican restaurant in Beauport, I worked with Ms. Alexandra’s Sec III class. What was special is that I had these students for THREE hours, which gave me time to share a lot of writing tips, but also to do two writing exercises. This is where my day turned AMAZING. I did one short exercise where students wrote about a treasured object and what it means to them. Camille wrote about her necklace with a cat charm: “My grandmother always wore the necklace…. She loved cats. It reminds me of her.” See how the writing is simple, but touching. I love that sort of writing!

I also tried the other exercise with this gang – writing about a shocking moment. I warned the students the exercise might be hard, and that writing – like remembering itself – can require courage. A student named Gabrielle wrote a stunning piece about a heartbreaking death. And a student named Ludovick wrote about comforting his own mother. His description included the following beautiful sentence: “I could feel her heavy breathing warming my neck.” I asked for Ludovick’s permission to read that line to the class, and to share it here in my blog. As I said to the students, how much better is Ludovick’s line than if he had simply written, “She hugged me”?!

It was Ludovick who nearly made me cry today. It happened when we were talking about interviewing old people. I suggested the students ask old people (perhaps their grandparents) “What is the hardest thing you ever went through?” Then I told the students they need to ask a second question – that they cannot ask that first question without the second one. “What’s the question?” I asked the class.

The class was silent for a moment, and then Ludovick raised his hand and said, “What got you through?”

Ahhhhh. And ahhhhh. And thank you, Ludovick, and all the students in your class who shared their work with me today. I didn’t mention all the other students by name, but I read the work of at least a dozen students, and every piece was beautiful.

So, here I am on the train back to Montreal feeling like the luckiest writer in the world. Thanks to Mr. Lord for the invitation to your school, thanks to both you and Ms. Alexandra for sharing your students with me, and thanks to the students for your beautiful writing. And for nearly making me cry.

Oh, I nearly forgot to explain today's pic! I was asking Ms. Alexandra's class, "Raise your hand if you consider yourself a curious person!" And look how many students raised their hands! (I think I see 15 raised hands, but I have OLD eyes.) Anyway, I told the kids that curiosity is another important trait in a writer!

Fun Day at Roslyn Elementary School
Back to School in 2023 -- Reporting to You From Ec...