I Tried Not to Write Another Blog Entry Today...

I tried not to write another blog entry today, but my plan failed. That's because I had too many interesting moments during my second day of writing workshops at St. Thomas High School!! So although I'm only home for another hour (I'm heading to Quebec City to do more writing workshops there tomorrow), I could not resist filling you in on today's developments! 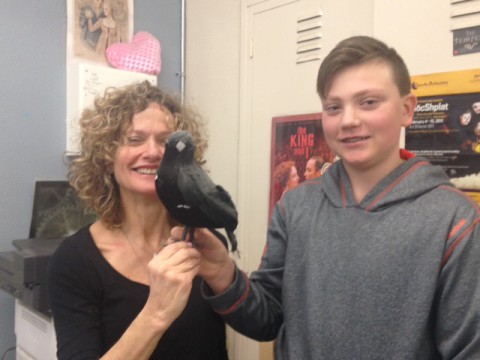 Because this was my second day with the same students, there was time to tell them about how mum's experience in a Nazi concentration camp (a story she kept secret for more than 60 years) inspired my novel What World Is Left. I also told the story of my monkey man necklace... and then we moved on to a variety of writing exercises.

What, you may be asking, is the meaning of today's pic -- in which you see me and a student named Cory admiring a stuffed crow? Well, it's because I asked the students to observe something interesting in their classrooms -- and Cory came up with the crow. Here's how he described it: "It looks like he has gotten himself stuck in time because he isn't moving." Interesting, no?

Most of the exercises I did with the students today focused on observations and how what we observe reveals interesting things about what matters to us -- or in the case of fiction, our characters. A student named Anastasia observed something that cracked me up -- that there was a long black piece of thread hanging from the bottom of my leopard-print skirt. I loved Anastasia's description of the thread: "It almost touches the floor and dances around as her skirt moves in motion with her body." (Not to leave you in suspense here -- I tore off the errant thread, although I did like the idea of it dancing around with me!!) In another exercise, Anastasia reflected that her observation showed that she may be what she described as "a bit of a perfectionist."

A student named Giuliana observed a dying poinsettia plant. "It looks," she wrote, "sad, wilted, dry." In her reflection, Giuliana added, "I think my eyes met with the flowers because I had a hard week." That sentence and the way Giuliana said her eyes "met" with the plant really touched my heart.

I spent lunch in the library and I encouraged aspiring writers to come and show me their work or talk to me about writing. A student named Sophie told me, "What I write is never as good as what's in my head." I loved that -- you know why? Because it's the way I feel about writing every single day -- and I bet most professional writers feel that way too. So guess what, Sophie? You're on the right track!

Well then, that's enough blogging from me for today. I'll be at Ecole Secondaire de la Seigneurie tomorrow, then back at St. Thomas next Tuesday. Something tells me there'll be plenty more to report to you!