The Meilleur Kind of Travail Together

The bilingual title of today's blog entry "The Meilleur Kind of Travail Together" is in honour of an amazing bilingual Blue Metropolis project I've been working on together with graphic novelist Laurence Dionne. 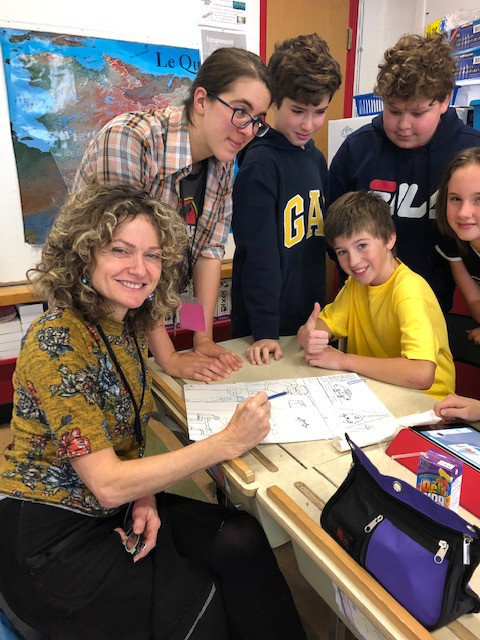 That's Laurence behind me in today's pic. We spent the morning at Courtland Park International School in St. Bruno, and on Friday, we'll be at Ecole Père-Vimont in Laval. We've been working in French with the Courtland students, and in English with the kids at Père-Vimont. Together, the students are working on graphic novels about a pair of twins -- one English-speaking, and one French -- who were separated at birth.

Here's a fun thing about collaborating on creative work. I don't remember who came up with the idea for this project! I think it was William St-Hilaire, president of the Blue Metropolis Foundation, the organization behind the project. But Fréderick Gaudin-Laurin, who is managing the project for Blue Met, thinks it was MY idea! See, that's what happens when people work well together ... we don't even remember who thought of what!

The students' graphic novels are nearly done -- and they'll be published in 2020. Also, we're going to have a bilingual launch-lancement.

Today, the Courtland Park students worked on a group poem describing themselves and their experience with the project. Our first draft of the poem included the line, "we speak two languages: français and English." But then a student named Olivier came up with the very good suggestion that we change the line to, "we speak two languages: French and anglais." I told the students that it struck me as more playful to name the language using another language! And they all agreed!

While Laurence was showing the students tricks for transferring their drawings onto the computer, she needed to return to a previous slide. A student named Juliet called out, "Tu peux back-er up."

I once heard that the most bilingual people are capable of thinking in two languages -- and that sometimes it happens it one sentence -- like it did for Juliet when she invented the French verb "back-er up"!

I think you'll be impressed when you see the kids' drawings and read their stories. We'll be at Père-Vimont on Friday -- to finish up the story of the twins. Special thanks to the wonderful teachers -- Mr. Geoffrey at Courtland Park, and MIss Annie at Père-Vimont... and to the students for their wonderful "travail" together!

It's A Wrap! The Mysterious Story of the Twins...
An "Ah Ha" Moment at Rosemere High School

I sure hope I can get to the launch of this one!!! You are one incredible human being!!! These kids will never forget these writing experiences!!! I find myself often throwing a French word into an English sentence...and chalk it up to those senior brain cells multiplying like crazy!

0 Cancel Reply
I sure hope I can get to the launch of this one!!! You are one incredible human being!!! These kids will never forget these writing experiences!!! I find myself often throwing a French word into an English sentence...and chalk it up to those senior brain cells multiplying like crazy!
Cancel Update Comment
First Page Previous Page 1 Next Page Last Page